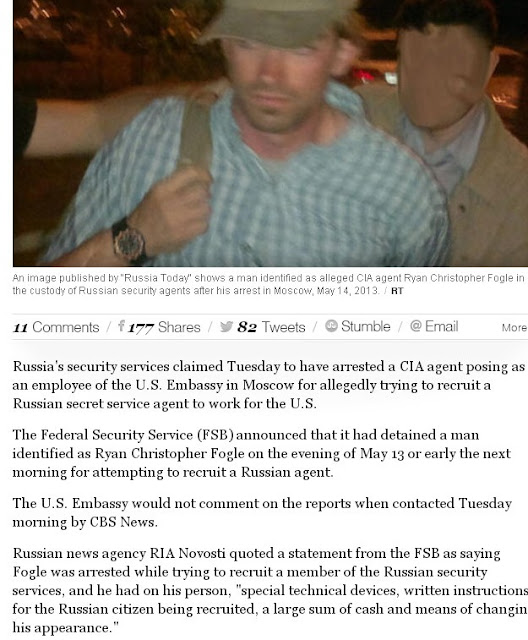 While there would appear to be a complete and utter lack of any tradecraft being applied here, I will say this--you cannot trust anything that emanates from the Russian media or from Russian law enforcement. The way they go about framing business people and journalists is very similar to what is being talked about in this article.

But, having said that, if this is a real CIA employee, who taught this person tradecraft? Is this really what we have come to? And why wasn't the recruitment of a Russian secret service agent carried out in a neutral or third country where it would be outside of the jurisdiction of Russian law? Granted, you have to go and find these people and getting them to turn isn't always easy, but how did this go so horribly wrong?

An idiot but probably not a spy:

The diplomat in question, Ryan Fogle, third secretary of the Political Department of the U.S. Embassy in Moscow, was declared "persona non grata" Tuesday.

Fogle was detained overnight Monday to Tuesday "during an attempt to recruit a representative of one of the Russian security services," the Foreign Ministry statement said.

If Fogle were any kind of a real danger to Russia, they would hold him and put him on trial. He appears to be an embarrassingly inept operative who decided to run around playing some sort of a game. The wig alone is an indication that this man should never have been allowed to operate anywhere outside of a training facility dedicated to teaching him how to not look like a jackass in public. Either someone cut a deal to get him freed or the Russians know they don't have much of a "spy" on their hands.

This story makes me wonder if Fogle wasn't looking for drugs or sex and ended up being used to humiliate America's diplomatic presence in Russia. Something is just not right here.
on May 14, 2013