This is Why You Don't Keep a Gun in the Barracks, Ever 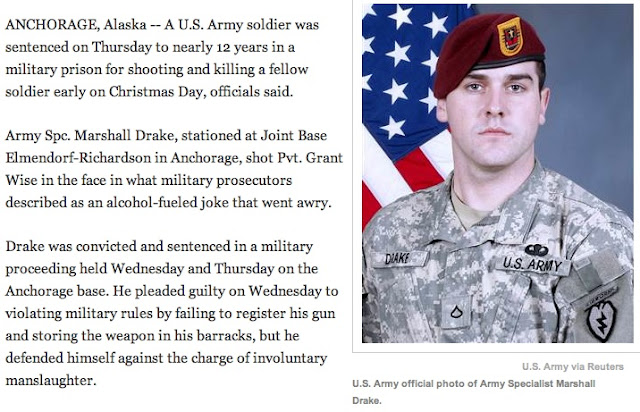 In the ongoing non-debate about gun control that we are having in this country, I keep going back to the core reason why we can't have an honest debate.

People think gun control does not work. But, in point of fact, it certainly does.

This story is not really about guns, but it is about judgment and opportunity. It is about common sense. And if you start to think about something as basic as public safety, you have a chance to consider gun control from another angle.

Whatever happened in Alaska between these soldiers was a tragedy. I'm sure that Mr. Drake would certainly like to go back and not shoot his fellow soldier. But, at the crux of the Army's case against him is the charge of having a gun in the barracks, and an unregistered one at that.

As shocking as it is for some people, our soldiers are not allowed to have guns in their barracks when they are stateside. I'm sure that the NRA is apoplectic about this, but the fact remains--the Army isn't going to change its ways. It is not going to allow guns in the barracks. In some cases, weapons can be in the barracks, but they are still accounted for; ammunition is never to be loaded into a weapon unless that soldier is performing some sort of guard duty. And, under no circumstances, are you allowed to keep your loaded gun in the barracks when you're at your duty station. That's right--the United States Army practices the most stringent kind of gun control. Zero tolerance, no allowances, no do-overs.

If the people trained to handle weapons can't have guns with them in the place where they sleep, watch television, and live, then why should we be surprised when the Army prosecutes someone for breaking that rule? The Army has moved well beyond the gun control debate into the realm of common sense--if you let soldiers have guns, soldiers are going to shoot each other dead. Accidentally, on purpose, or drunk, they're going to shoot each other, and that's why they're not allowed to have their personally owned weapons on them. That's why they are searched and watched and forced to account for the weapons and the ammunition they use.

Someone has to figure out that if you let people have a bunch of guns, you're going to have people getting shot. If that's cool with you, then, by all means, flood the world with guns and hope you don't get blown away. While you're doing that, the people who run the Army are going to practice the kind of gun control that they wish they could practice in a lot of urban areas.
on May 03, 2013