This is a President Who Has Incompetent Enemies 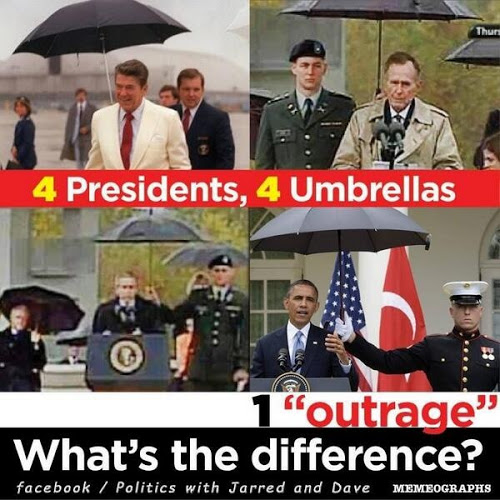 Well, here's what Sarah Palin did today that was stupid:

Mr. President, when it rains it pours, but most Americans hold their own umbrellas. Today in the Rose Garden you dismissed the idea of a Special Counsel to investigate the IRS scandal. With that, your galling political hubris shined bright in the midst of today’s dark clouds.

She goes on to talk about a lot of things that are over her head, like ethics, following the law, abuses of power--you know, all of the things that forced her to resign from her job as the half-term governor of Alaska.
When you, yourself couldn't continue in office because of legal problems, you really can't go around trying to make hay out of things that were done by people who work for the President.
This line, in particular, shows that Palin has abandoned any semblance of intelligent, mature commentary:

Speaking of coverage, glad you finally called in the Marines... shame it was just to hold your umbrella.
- Sarah Palin

And, as you can see above, when the President appears in public, it is not uncommon for others to hold up and umbrella so he can address some issue or give a speech. In Palin's world, this is something that can be used to "humiliate" the President. Her grasp of American history is so slight that it would never occur to her to try to state her case without acting like a junior high scold.
This president benefits from the ridiculousness of his enemies.
on May 17, 2013