Only Republicans Are Allowed to Use the IRS Against Their Enemies 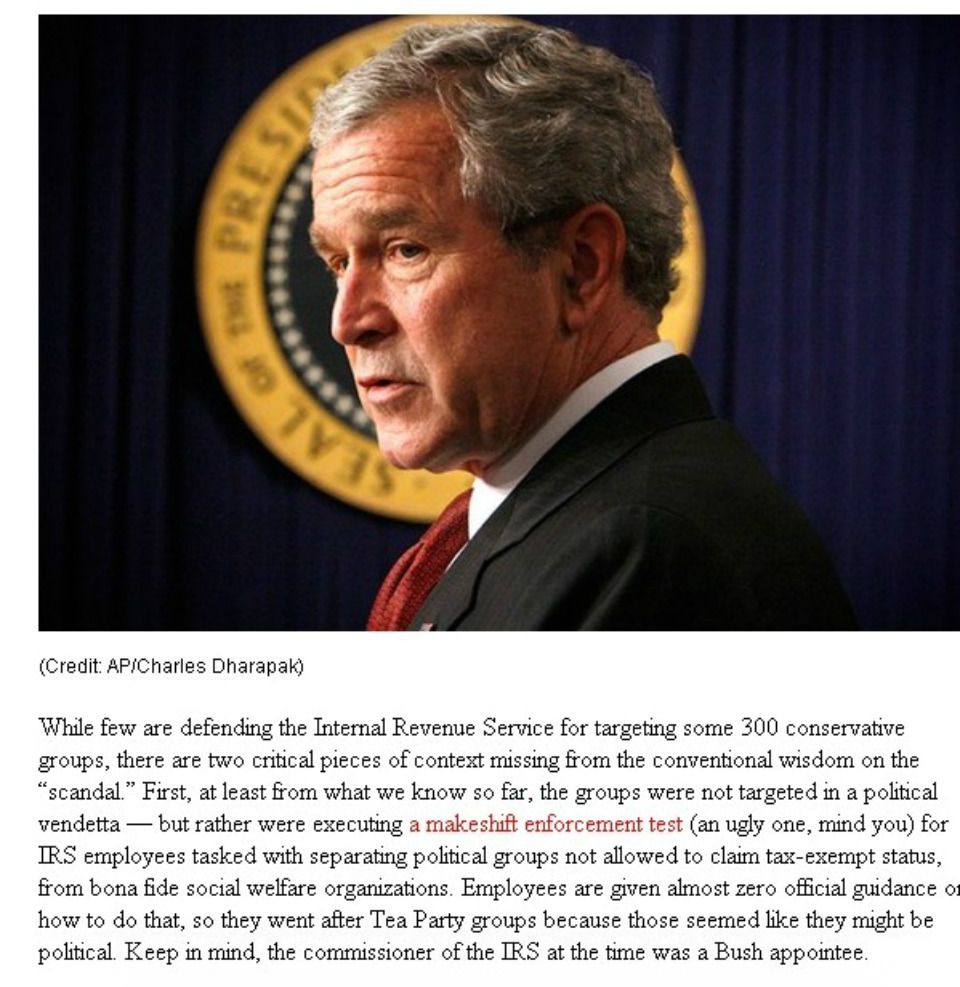 If we had a functioning, competent working media, this story wouldn't be anywhere near as big as it is. OMG. Someone had to fill out an extra form? This is the end of civilization.

Seriously, though. This is about filling out extra damned forms. It is the greatest non-scandal since Benghazi collapsed as a scandal mere hours ago. I think that whoever tried to use their power at the IRS in an abusive manner should be handled like any other government bureaucrat who abuses their power--they should be punished and fired. This is something that every Federal agency has to deal with. Abuses of power are part and parcel of having a government. Our government is naturally hard-wired to root these things out and correct them when they are found. This is called Getting Rid of Dead Wood.

Except for how these issues were handled during the Bush years, of course [via ALEX SEITZ-WALD ]:

The well-known church, All Saints Episcopal in Pasadena, became a bit of a cause célèbre on the left after the IRS threatened to revoke the church’s tax-exempt status over an anti-Iraq War sermon the Sunday before the 2004 election. “Jesus [would say], ‘Mr. President, your doctrine of preemptive war is a failed doctrine,’” rector George Regas said from the dais.

The church, which said progressive activism was in its “DNA,” hired a powerful Washington lawyer and enlisted the help of Schiff, who met with the commissioner of the IRS twice and called for a Government Accountability Office investigation, saying the IRS audit violated the First Amendment and was unduly targeting a political opponent of the Bush administration. “My client is very concerned that the close coordination undertaken by the IRS allowed partisan political concerns to direct the course of the All Saints examination,” church attorney Marcus Owens, who is widely considered one of the country’s leading experts on this area of the law, said at the time. In 2007, the IRS closed the case, decreeing that the church violated rules preventing political intervention, but it did not revoke its nonprofit status.

And while All Saints came under the gun, conservative churches across the country were helping to mobilize voters for Bush with little oversight. In 2006, citing the precedent of All Saints, “a group of religious leaders accused the Internal Revenue Service yesterday of playing politics by ignoring its complaint that two large churches in Ohio are engaging in what it says are political activities, in violation of the tax code,” the New York Times reported at the time. The churches essentially campaigned for a Republican gubernatorial candidate, they alleged, and even flew him on one of their planes.

You see, this is only a scandal because someone in the White House is a Democrat now. This is only a scandal because the media cannot do context.What happened here was little more than the application of a standard that exists because the political danger of using the IRS to attack an enemy is not high enough to warrant excluding it from use.
Why you would allow groups to engage in political activities, in violation of the law, and NOT investigate them is beyond comprehension. This is the basic principle of oversight--when you discover that someone is taking advantage of the law, and is breaking the law, you must investigate the matter and correct the misconduct. At a minimum, the Obama Administration is going to have to make certain that the people who did this are fired but, really, why should they?
Shouldn't we just grow up and realize that the most effective tool for silencing dissent is the IRS and that whoever holds power is going to go after their ideological enemies in order to shut them up? Or are we going to get some good government until a Republican takes over?
on May 14, 2013