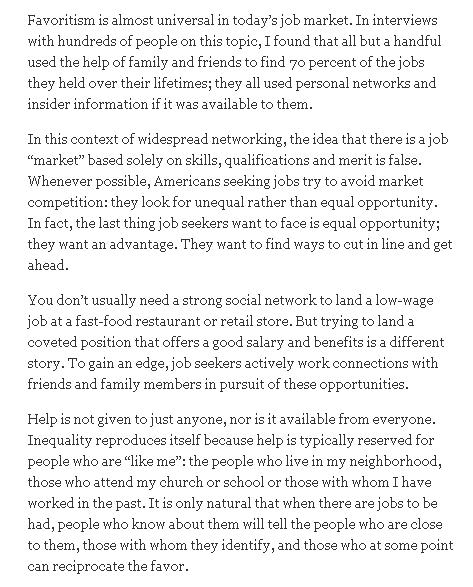 Inequality drives our economy. We do no mandate full employment because we let the market decide who gets what. If you think there is merit in this system, think again. Merit is meaningless when it comes to getting a job. Merit is also meaningless in the blog world. I don't care who you are or what you have to say--blogging is dominated by a small group of people who link to one another and have been at this for more than seven or eight years.

Buried in this very interesting article about jobs, favoritism, and inequality is the notion that affirmative action isn't responsible for people being passed over for jobs; they are being passed over because others have social network connections that allow them to leap ahead of others. These connections are old school. They center around race, family associations, and familiarity.

The article asserts that unemployment for African-Americans is higher because they do not have the advantage of contacts and that white people tend to help other white people. This reality would suggest a change in policies and rules but I wouldn't expect that to happen. People have settled into patterns and habits that are, sadly, driven by a need to practice the most basic form of tribalism.

I would argue that the people who try to help Veterans find jobs ignore one simple reason why no one hires Vets--they don't know them personally and they don't want to know them because the simple act of dropping out of the economy to serve indicates an unwillingness to maintain tribal connections.
on May 06, 2013