Mercy For White Collar Criminals is the American Way 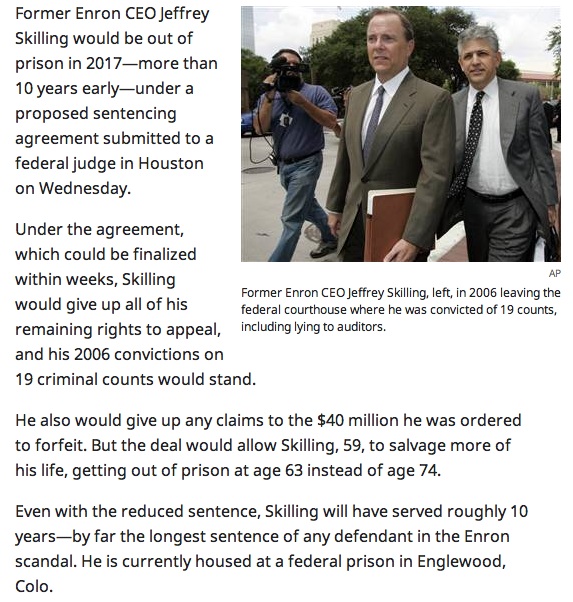 So, if I'm reading this right, and I probably am, Jeffrey Skilling is going to have ten years knocked off his prison sentence because he's going to give up a claim on money he stole and was ordered to forfeit. Am I alone in thinking that this miscarriage of justice is a uniquely American aspect of showing deference and mercy towards the ruling, elite, business class while showing little if any concern towards the people at the bottom end of the spectrum?

Skilling should lose every penny he ever made and serve every day of his sentence. Granted, there is time off for good behavior. That should be applied to any and all who deserve it. A man who ruined the lives of tens of thousands of people and looted their life's savings and wrecked so much deserves the time in prison he was given.

We have a problem with how we apply our values in America, circa 2013. Our elites have failed us, again and again, and prison is probably the best place for them. I would hope someone would have the good sense to keep Skilling from wrecking the lives of people in the future. My guess is that he will, when released early, find some loophole and go back to doing what he does best--proving that our elites are craven, incompetent thieves.
on May 08, 2013