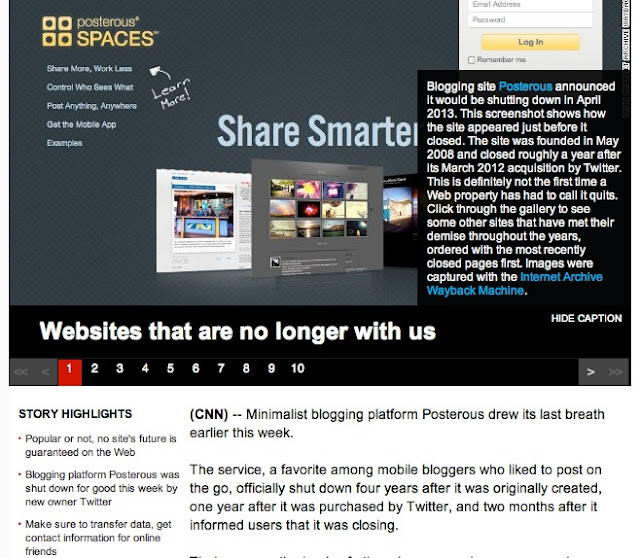 I feel bad for anyone left on Posterous, or "Posterous Spaces" or whatever they ended up calling themselves.

Posterous was one of the first platforms that I was able to embrace outside of the three blogging platforms that I have used. I started on WordPress, went to Google, then I went to Squarespace, and, in the end, I went back to Google when they upgraded the Blogger platform and added Google+. At some point, there will be another change, but I have settled on sixteen domains and four blogs that I regularly try to update; the other twelve are for fun and whatever else.

I liked Posterous a lot; you could post something there and, when the settings were aligned properly, whatever you posted there was blasted out to out sites, like Tumblr and Twitter and even Blogger. You could automate posts and they would scatter throughout the Internet. What people had a problem with was the multiple ways in which identical content was being spread around--creating a Spam kind of vibe that made purists angry. Whether or not that was a viable business model was born out by the fact that they were heavily involved with allowing Facebook users to log in and by how hard they went at the larger and more successful Tumblr which, as luck would have it, is now run by a crazy man who hates his own employees. Posterous never had that juice or that evil vibe, but it did have a great dashboard.

It was a great platform; they let you do just about anything, including registering your own domain and blogging on it like any other platform. And then, it was gone.

How many people have abandoned posts on Posterous? Not me. As soon as they were bought, I cut that cord. Whenever someone sells out, get away from them as fast as you can.
on May 05, 2013