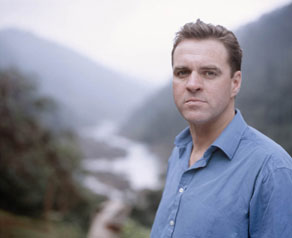 Speaking at the Tenth Annual Altegris Conference in Carlsbad, Calif., in front of a group of more than 500 financial advisors and investors, Ferguson responded to a question about Keynes' famous philosophy of self-interest versus the economic philosophy of Edmund Burke, who believed there was a social contract among the living, as well as the dead. Ferguson asked the audience how many children Keynes had. He explained that Keynes had none because he was a homosexual and was married to a ballerina, with whom he likely talked of "poetry" rather than procreated. The audience went quiet at the remark. Some attendees later said they found the remarks offensive.

No one should be surprised by the fact that Niall Ferguson is merely an anti-intellectual troll and the holder of ideas so far outside of the realm of acceptable norm that they should have relegated him to obscurity long ago. How on Earth could being gay have affected what Keynes wrote and thought about economics?

Niall Ferguson should be asked to explain, in academic terms, how being gay invalidates Keynes' writing and opinions. If this is his thesis, then let him defend it.

And Harvard still employs this hack?

When you make the case that someone has a bias, you are obligated to back it up. I would be curious to see how Ferguson can support his argument; is this merely an institutional bias against homosexuals in British academics or is there something else at work here? And how can you prove that homosexuals do not have any investment in the future solely because they do not procreate? How ridiculous.

If his comments do not get him fired then you can truly celebrate the freedom that America's academics are afforded. Of course, Ferguson should be allowed to hold his views; the problem is, he is not capable of defending them and is merely trolling people in a setting where he was, no doubt, paid to speak. How is that not an example of what's wrong with celebrity and academia?
on May 04, 2013