Did it Occur to Anyone That Sarah Palin Might be Dumb? 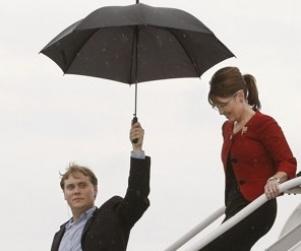 You know, I don't think Sarah Palin is even trying anymore.

Sarah Palin is campaigning again. Despite getting defeated five years ago because nobody took her seriously, she still hasn’t thought about changing her tactics.

Since 2008, the former Alaskan half term governor has been the voice and face of Obama bashers nationwide, carrying that torch right into her political grave.

Her latest dumb attention ploy: She posted a letter to President Obama on Facebook, much in the way teenage girls do while complaining Joe Jonas didn’t respond to their YouTube video inviting him to prom. In the letter, Palin, fishing for either a Senate seat or perhaps another job as a Fox News correspondent, said Obama is behind a “scandalous hat trick” in Washington and that he should carry his own umbrellas.

I wrote a few days ago about how President Obama benefits from having incompetent enemies. I don't think Palin could even rise to that level. She's a mere troll, and trolls, like deficits, don't matter.
If you're going to write something about someone, and criticize the fact that there was a person holding an umbrella for them, you should probably think about whether or not there are pictures of you where someone is holding an umbrella over your head. You should really double down for more than eight seconds and think about that. It would inform your commentary and help you build credibility if you did that. Because if you realized, oh, crap--there are published photos of people holding umbrellas for me so I'd better not criticize someone who is trying to give a speech next to an official from a foreign country and conduct some diplomacy like a real adult--I'd better not say anything!

That moment passed for poor Sarah, and Princess Dumbass of the North Woods had another FAIL this past week. Forever and ever, the power and the glory, and for thine everlasting, Amen. Or something like that. I mean, wow. Take a knee and breathe slowly.
Sarah Palin is just dumb. That's all there is to it.
on May 19, 2013