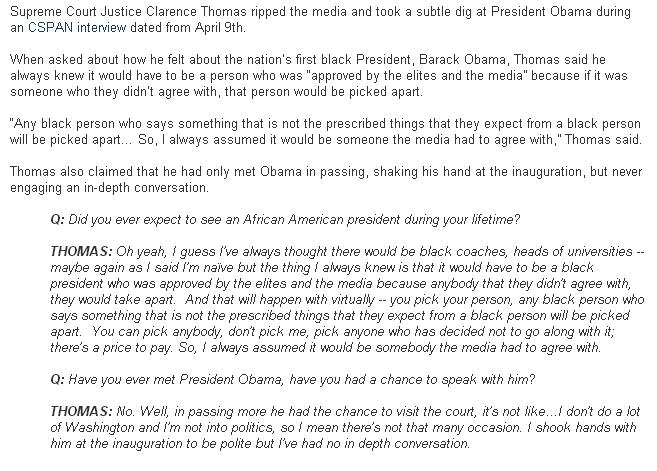 Clarence Thomas holds the position that he does entirely because he made himself "acceptable" to the elites in the Republican Party. There is no other justification as to why he was even nominated to the Supreme Court. He has been a terrible bust as a thinker, as a jurist, and as a person who had a chance to do something with his more than 20 years on the bench.

The legacy of Clarence Thomas is silence. He went seven years without a publicly recorded utterance while serving on the Supreme Court; that speaks volumes about what he really is, which is nothing more than a cipher for the people who put him on the bench.

Why is he complaining about the fact that President Obama isn't interested in meeting him or talking to him? What could he possibly learn from a man who has thrown away the last twenty-two years of his life, voting in lockstep with the conservative base?

Thomas has no right to complain about how the "elites" have approved of President Obama; he has done nothing to serve the interests of the American people, only the craven needs of those who tell him to shut up and keep voting.
on May 03, 2013