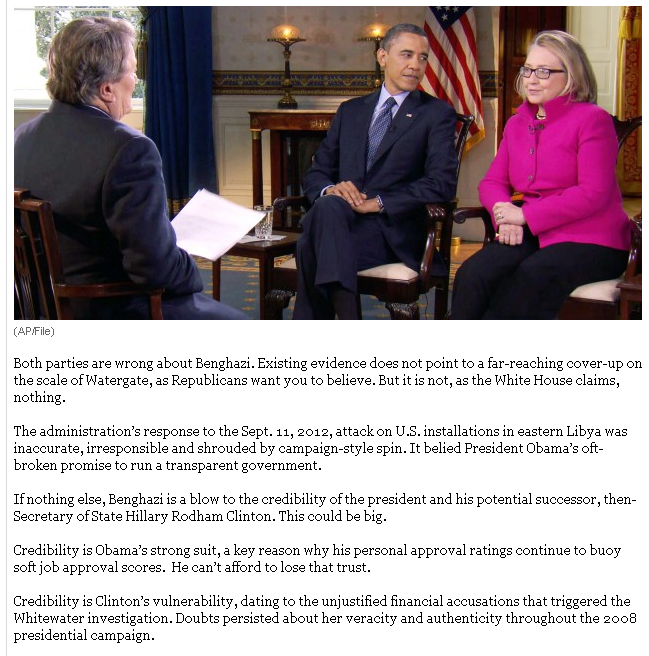 Here's the simplest answer you're ever going to get about what happened in Benghazi on September 11, 2012. Sending diplomats into unstable countries is going to result in some of them getting killed, but these dedicated professionals go into these places because they know that they are serving a higher purpose than politics.

The Republican Party has failed to make hay out of Benghazi. They have struggled to find that magic scandal with which they can bring down the Obama Administration. They don't care about dead Americans because, if they did, they would have insisted on bringing home American troops from Afghanistan years ago. If they cared about dead Americans, they would have said something about the 60 Americans who died because of attacks on American diplomatic facilities during the Bush Administration (they certainly remembered to speak up when Americans abroad died during the Clinton Administration).

Ron Fournier is wanking himself off with his assertion that Democrats see nothing. No, Democrats see plenty here. They see a tragic incident, they see the difficulty of protecting our diplomats abroad and they see the problems inherent in trying to police the entire world with a military that is fundamentally broken and exhausted by over a decade of war. The answer to every problem is not shock and awe and it isn't the wholesale invasion of another country by an overstretched military equipped with the wrong vehicles and made to sit in place so our enemies can use them as target practice. The answer is to honor people who attempt diplomacy. Republicans hate diplomacy; why else would they have wrecked the State Department?

Republicans also want this to be their reason to remove Obama from office. That's been the strategy since the moment it happened. This is payback for the killing of bin Laden and for getting re-elected. Everything is political, and foreign policy matters are now so charged with politics as to render them a liability to whoever is in charge. Anyone who thinks that national security is not routinely being politicized is naive and foolish. That's why the bungling of Benghazi happened, because it happened right in the middle of a Presidential election when people were starting to pay attention.

I would be shocked if the Republicans gave up on Benghazi. They stuck with birtherism for too long for that to happen. This "scandal" has a shelf life of at least another six months if not more. Have we had impeachment hearings yet?
on May 10, 2013