You Cannot Stop Stupidity on the Internet 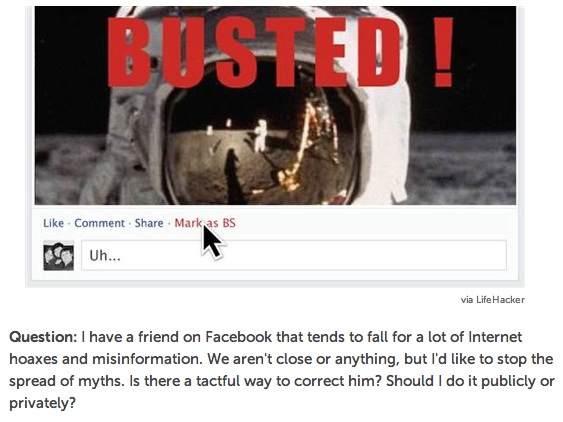 The correct answer to this question about how to correct people who spread hoaxes and things of that nature is this: you don't have to bother with idiots.

That's right. You're not responsible for idiocy and stupidity on the Internet.

It has always been there; go back to the late 1990s and look, if you can, at any message board or any chat room and there you will find trolls, idiots, stooges, and earnest folk. You will find unimaginable ignorance on a grand scale. You'll find howling crazies and people pretending to be masters of the dark art of knowing something about that which they could not possibly know anything about.

If you have a friend on Facebook who spreads around the hoaxes and the deliberately false things that people with an agenda push out there to make money off of--think of the people who run ads, constantly, about buying and investing in gold and silver--then, brother, unfriend that jerk and think about moving to a better social media platform.

Google+ is full of nutjobs. Last night, some clown tried to tell me that Benghazi happened after Obama had been in office for five years. President Obama hasn't even been in office for five years yet; that will happen on January 20, 2014. But this assclown's lack of math skills did not bother me. I just said "I win the thread" and let him spew invectives against me. Who has the time for such trash?
on April 28, 2013