Would You Take Foreign Policy Advice From This Man? 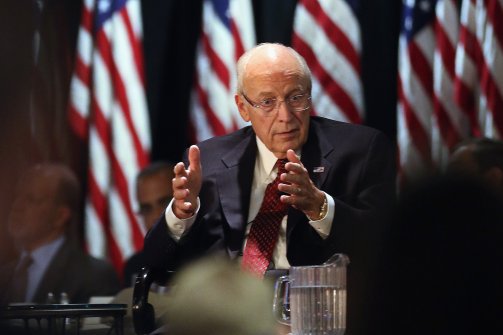 I find it hard to believe that anyone would listen to Dick Cheney talk about foreign policy:

That may be the kind of technical jargon he mastered during years of running the Pentagon, but I think we kinda know what he means.

How to get out of the doo-doo? Well, that’s a whole other question.
Bush’s father was the first public figure associated with the phrase, so it’s nice to see it’s still getting traction decades later.

This might be somewhat unfair to Cheney. CNN reported Cheney’s stark assessment on Kim Jong-un’s recent saber rattling, citing an unnamed aide. Cheney is also reported to have said that the United States has little intel on the situation in the secretive communist country, and so “you never know what they’re thinking.”

It’s hard to argue with either conclusion. It’s a lot easier to invade a country that doesn’t have weapons of mass destruction, despite Cheney’s claims to the contrary a decade ago, than one that is actually developing nuclear weapons.

That's Howard Kurtz paying homage to the idea that Cheney knows what he is talking about when it comes to dealing with foreign regimes that threaten the stability of the region in which they are located.

When you parse the favorability granted by Kurtz towards the idea that Cheney is talking like an insider and like a foreign policy expert, you come away with the idea that Kurtz clearly wants Cheney back in charge of things. He clearly wants that savvy and that expertise to guide us back into a disastrous war of choice in an Asian country. They used to say that you should never fight a land war in Asia. Bush and Cheney started two of them, finished neither of them, and wanted to start three or four more. That's your expert? That's your daddy figure?

Cheney's analysis of North Korea is useless. It was him and John Bolton who spearheaded the insane policies towards North Korea during the Bush Administration years, and it led to the acquisition of nuclear weapons. They did nothing to stop this and they were disengaged and refused to use basic diplomacy. What a record.

Kurtz cannot acknowledge the failure of Dick Cheney to positively or competently guide any aspect of American foreign policy. He cannot apply a basic standard towards Cheney and dismiss anything he says based on his actual record. When you look at the failures associated with Cheney, a rational person would conclude that no one should seek his counsel on anything other than bankrupting the country and ruining the military.
on April 12, 2013