Winning the Rhetoric War Against The NRA 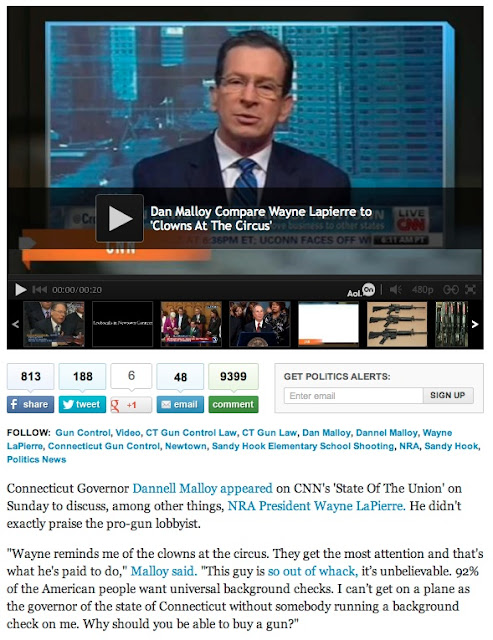 It's a good thing for Governor Dan Malloy to represent his state and the laws that he is signing into existence with tough talk and direct rhetoric. Without his efforts to push back against the gun lobby, the people who have voted for those laws wouldn't have as much cover as they do right now. Instead of going after the state politicians, the NRA now has to contend with the fact that the governor is going to lead by example and make himself the symbol of those gun control laws.

Sure, the NRA will spend money to go after politicians in Connecticut--how much really isn't the issue. It has long been the fear of having the NRA finance opponents that has kept people from voting for tougher gun laws. But, if you're going to give people cover, you do it the way Malloy did it by making it a soundbite that they will use against him and not against the vulnerable candidates who are going to face the voters.

You can argue against name calling, but you can't argue against a guy who signed a tough law and then told the biggest bully on the block to come after him, specifically, after putting his name on the line.
on April 08, 2013