When Horrible People Refuse to Go Away 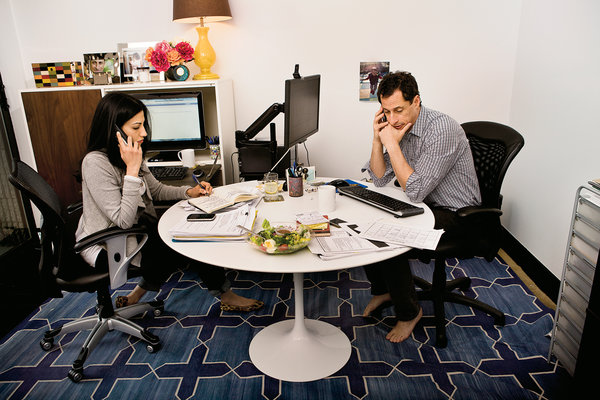 One day in early February, I met Anthony Weiner and Huma Abedin for breakfast at the Gramercy Park Hotel, one of their regular joints, just a few blocks from their apartment on Park Avenue South. The first thing Weiner said when I sat down was that their 13-month-old son, Jordan, had just moments ago taken his first step. They were both giddy, kvelling with baby-pride, especially Weiner, who, with all his free time, has become his son’s primary caretaker. This is what life is like now for the man whose name is invariably followed in print by some version of “the disgraced former congressman who sent out a lewd picture of himself via Twitter.” He seems to spend much of his time within a five-block radius of his apartment: going to the park with Jordan; picking up his wife’s dry cleaning and doing the grocery shopping; eating at his brother Jason’s two restaurants in the neighborhood. This is what happens after a scandal: Ranks are closed and the world shrinks to a tiny dot. It is a life in retreat. And for a man who was known, pre-scandal, for his overweening ambition, his constant presence on cable news, his hard-charging schedule that verged on lunacy, well, it has been quite a change.

Yes, they are a loving couple with a child--that means he should now be mayor of New York City? Please.

This is a horrible piece of journalism, right down to the far-too-wordy first paragraph and the blind insertion of the writer, Jonathan Van Meter, into the piece right from the beginning. Yes, it's a feature story for the "magazine" section but, really, it's a political piece designed to make Weiner palatable for higher office once again.

Decency and manners mean nothing to people like Weiner. He should find a nice job in the private sector and make a good living. He has given up his right to serve the public because he demonstrated that he had absolutely poor judgment and poor character. Lying about sex isn't the issue; using social media to insert himself, and his nakedness, into the lives of others demonstrated his inability to separate his private life from his public life as a sitting member of Congress.

He exposed himself to blackmail, first and foremost, and because he was a sitting member of the House Intelligence Committee and held a high security clearance, he could have been blackmailed into damaging the safety and security of this country.

As mayor of New York City, Weiner would receive intelligence materials and briefings with classified material, albeit of the kind that would be sanitized in ways to make it more confidential than secret. But the larger issue here is that Weiner has already demonstrated that he lacks the judgment to have access to such material.

He should be forgiven, obviously, but he should not be given access to classified information. It really is that simple. He is an ego-driven deviant who refuses to go away. In and of itself, that should have been the focus of this fluff piece rather than how he is a doting father with a wife whose own self-esteem precluded her from leaving him. Clearly, he wanted sex with all of those other women in order to fill a hole in himself no one else could, and now he wants power again?