There Will Be No Mercy 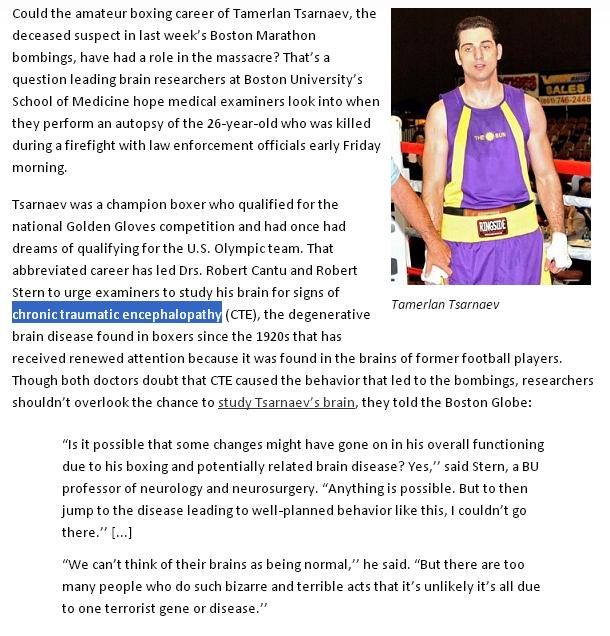 It simply would not matter if they found that Tamerlan Tsarnaev suffered from chronic traumatic encephalopathy (CTE); there will be no mercy or understanding for him or his surviving brother. And that's not entirely a bad thing because an outpouring of sympathy or empathy might encourage others to express their rage through terrorism. We don't need that as a society.

We do need to establish what the hell went wrong with their lives. That does not mean that there will be forgiveness. It means there will be accountability and information that will come from the tragedy. The doctors are quick to say that they don't "think" it played a role in Tsarnaev's decision to bomb the Boston Marathon. This is not because there is actual information in hand (something you'd think a doctor would want to have BEFORE making any kind of a pronouncement) but because they know they would be hounded for saying what they are saying.

Perhaps the anti-immigration crowd will come for blood and destroy these two men. It wouldn't change the fact that Tsarnaev's brain was turned to mush by being a boxer. And it won't change what happened. What I can't understand is, why wouldn't someone want to establish what could have caused this man to become radicalized and irrational?
on April 23, 2013