The Vikings Were Here First 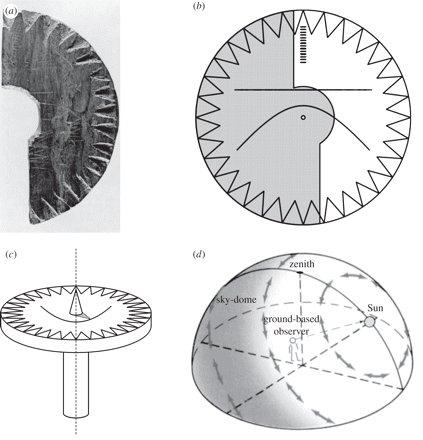 The image you see above is important because it demonstrates that history has been wrong for far too long. The Vikings were the first Europeans to discover North America, and they were far more sophisticated and learned than we give them credit for:

(a) The wooden disc fragment (found in southern Greenland) onto which the Viking navigators scratched some hyperbolic curves [1]. (b) The reconstructed sundial used by the Vikings for navigation on the open sea. The left, gray part of the disc has not been found. (c) Three-dimensional drawing of the Viking sundial with a conical vertical gnomon and its shadow, the endpoint of which touches the hyperbola scratched into the horizontal wooden disc. (d) Sky-polarimetric navigation by Vikings can only function if the direction of skylight polarization (symbolized by double-headed arrows) is perpendicular to the plane of scattering (determined by the sun, the observer and the celestial point observed).

The ability of the Vikings to cross the North Atlantic in small boats is not in dispute; what is in dispute is this whole business of Columbus Day. It is the one American holiday that I wish would be discontinued. Christopher Columbus didn't discover anything even remotely "American" and the Vikings were here long before any other Europeans. If they were settled in Greenland in the 10th Century, why wouldn't they have explored further?
Their ability to navigate the Atlantic allowed for them to explore vast areas of the North American continent. And yet, no one wants to fully acknowledge this because, well, the Vikings didn't write American history, did they?
on April 11, 2013