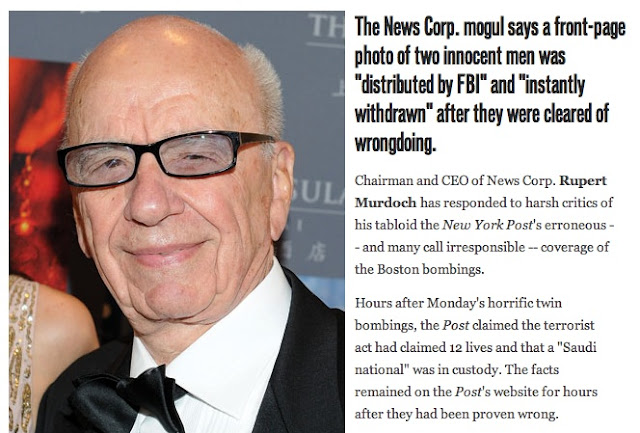 One of the good things that could come out of the bombing of the Boston Marathon is a comprehensive evaluation of how the media botched and bungled everything that was in front of them. The American people were left uninformed, misled, and chasing after the wrong suspects.

For the people of Boston, this was like being run over after being driven off the road. The public interest was not served by anything that the New York Post did to cover this story. A community was left gripped in fear largely because the people who were responsible for disseminating critical information acted like THEY WERE THE STORY by bragging about their own "scoops" which turned out to be wrong. Lives were upended and infamy was rained down upon the innocent simply because the New York Post, in a rush to be first, identified the wrong suspects. Repeatedly.

It cannot be stressed enough--this is one of those times when, Thank God, the media didn't get anyone killed by being grossly incompetent.

The New York Post was, in my opinion, the worst offender by a country mile. This is the newspaper that ruined several lives and got the biggest story wrong; it identified the wrong suspects, put their photos out there, and, given the violence that was visited upon the community, could have gotten two innocent men killed. Or it could have gotten anyone who even looked like the innocent men killed as well.

Rupert Murdoch has nothing to defend here. The New York Post should be left bankrupt by the decisions of a civil court and, in true Murdoch newspaper fashion, it should be shut down and abandoned in shame.
on April 21, 2013