Since When Does the Punter Matter? 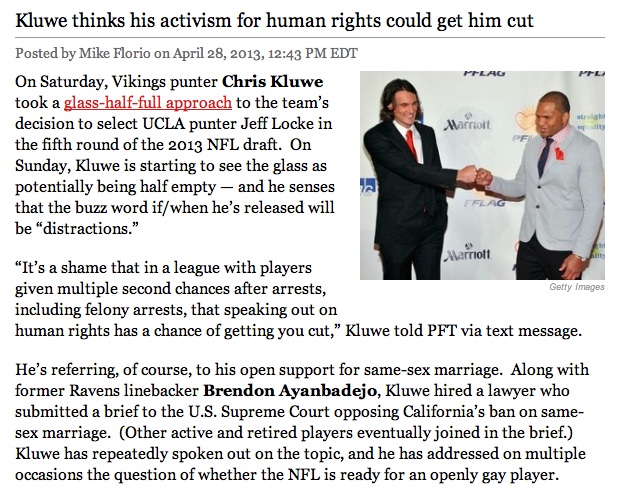 I am of two opinions on this issue of whether or not Chris Kluwe is done in Minnesota.

First, the punter is a player who matters in a statistical sense but not in the sense that the team with the best punter is always going to win. Kluwe is an excellent punter, and his efforts have placed Minnesota in positions where they can win games, get the ball back, and keep other teams from scoring. In and of itself, this is why you keep Kluwe because he is a performer.

Second, the Minnesota Vikings are a terrible, terrible franchise with a long, proud record of dumping on human beings and collecting the NFL's worst assortment of trash and criminality. This is a team that has decades of experience with domestic violence, bigamy, criminal sexual conduct, weirdness, depravity, debauchery, drunken driving, and assaulting parking enforcement personnel. In other words, they are like all the other franchises, only add in the bigamy.

It would be a shame to get rid of Kluwe, but, given how bad the Vikings are, it would not surprise me. I don't think it's about activism. It's about money. Why pay Kluwe as much as he deserves when you can find some rookie to do essentially the same thing for a lot less?

The punter matters; not many people realize that. But the position doesn't matter as much as the positions where the player commands tens of millions of dollars more. Saving a few hundred grand on a punter is penny wise, pound foolish, but that's what NFL general managers do. They trim rosters and cut perfectly good players for no other reason than money.