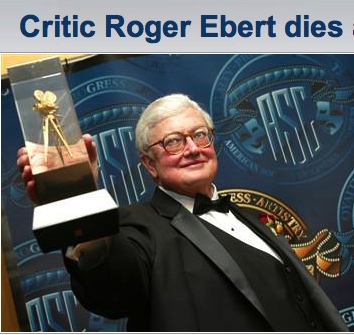 There is a tendency to dismiss film criticism for what it has now become in our culture--worthless and indistinguishable from shillery. The upstarts have come and gone, but the Pulitzer-winning Roger Ebert was the real deal. He reviewed films in a way that allowed him to be accepted by people as an arbiter of taste. That's now so fractured as to be impossible to find.

What's even harder to comprehend is that Gene Siskel has been dead since 1999. When the two of them had conversations about film, it was enlightening and valuable in ways that are now absent from our culture. They embodied the best of what the humanities were supposed to offer before bought and paid for shills and amateur ass clowns like Harry Knowles came along and figured out how to suck up to wannabe players for the privilege of kissing Hollywood's ass. The people who boo hoo about Knowles have forgotten that Ebert used to push back against bad films and offer stunning critiques that changed the industry.

With Ebert dies a great deal of class and dignity that you're not going to get from the clowns who now review films, particular Rex Reed, whose sole contribution to the culture in the past year was to call Melissa McCarthy fat.

Roger Ebert had class; he may have said a lot of impertinent and politically incorrect things, but his command of film was considerable.
on April 04, 2013