Our Elites Refuse to be Criticized, Even by One of Their Own 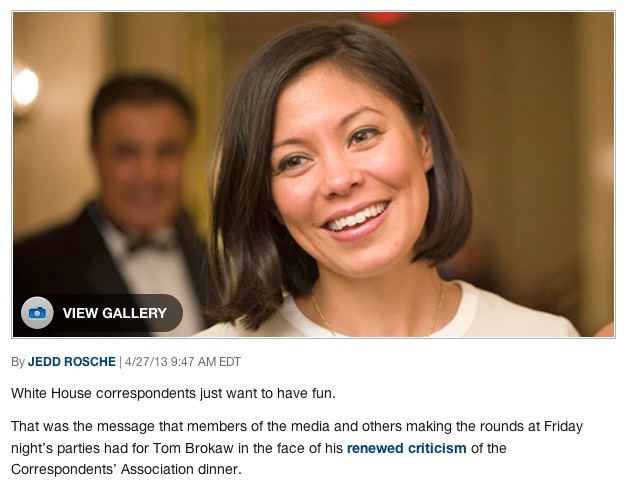 How much fun are the American people having right now? The economy is stalled, there are no jobs, everyone's broke, and we're looking at a summer where more and more young people are going to be underemployed and looking at starting college in the fall with less and less of a reason to expect a job should they graduate.

Tom Brokaw, who never met a powerful person he couldn't defer to, dared to say something critical about the youngsters who aren't as good at their job as he once thought he was (and, really, Brokaw's legacy is that he never went toe-to-toe with anyone like Dan Rather did and that's gotta sting) and now they've enlisted the furious writers at Politico to continue to denigrate anyone who gets between them and the people they perform the lickspittle backflip in front of for points, not style. Who are these people? They're the incompetents who can't lead, can't write, can't analyze, and survive through their connections. They're the ones for whom merit is something the nobodies have to worry about. They're the clowns who think everyone laughs at them without being able to see their own makeup.

Here's the most asinine thing you're going to read today (unless you're reading a conservative blog):

“As a former White House Correspondent, it’s really nice for people in politics and media to come together and have a little weekend of fun,” MSNBC host Alex Wagner told POLITICO at a reception at the Hay Adams hotel. “I understand the idea of the ‘celebrification’ of the event but I think it’s more of a testament to how interesting and compelling Washington politics is to the outside world.”

It would be really nice if these people remembered that their mission once was to comfort the afflicted and afflict the comfortable. Jeebus, what a pant load of self-congratulatory nonsense that turned out to be. Shame on you, Miss Wagner.

Who's doing something about this?

Not the President, but I'm sure he'd like to.

Not the Congress, because the only thing that will move them to action is when their plane ride home is threatened or when someone who donates the maximum calls their office.

Not the business community, which is raking in profits, cutting workers, and moving money to whichever offshore account can be operated under the radar.

Not the press because they are too busy sucking up to power.

So, really. Have a night of fun and enjoy yourselves. Congratulate yourselves on the fine year you've had informing no one of anything useful. We'll manage out here in the desert. You don't even have to phone it in for the rest of the week.
on April 27, 2013