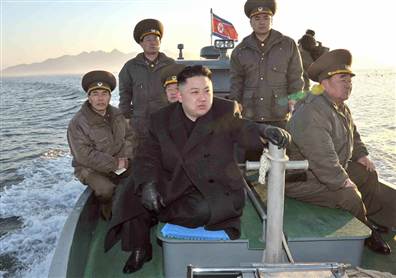 The old men surrounding this chubby young man know that their time is fleeting. The behavior of the North Korean regime, as of late, suggests that someone knows that a collapse is imminent or that factional infighting is going to destabilize the country in such a way as to cause the loss of control over the military or at least part of it. I suggest that we ignore people who say things like this:

Hug it out
Little more than a year into the job held by his father and his grandfather, Kim has managed to paint himself into a corner -- and the U.S. needs to give him a way out, says Han Park, a University of Georgia professor who has served as an unofficial negotiator in North Korea.

Because he has not consolidated his power at home, the fledgling leader cannot back off. "There has to be a face-saving device," Park said.

"Sanctions will not work. They have never worked," the professor said. "It will aggravate the North Korean leadership even more."

To "bail out" the erstwhile leader of North Korea is to establish his rule for the next fifty years or more, and that should be considered unacceptable to the world's leaders. North Korea is home to massive deposits of natural resources--a normalized, unified Korean peninsula that is stable and capable of self-governance should be the goal of anyone who realizes that this is a world of resource shortages and interconnected trading.
Killing Kim Jong Un would be preferable to letting him rule for the next half-century, which will be full of starvation and fear in his country and would deny much of the world the ability to fully trade with the Korean-speaking people. A deal should be struck with those old men in the picture above--put a round through tubby's head, take down your rhetoric a notch, and figure out a way to peacefully transition yourselves into a form of governance that allows you to openly trade and interact with South Korea's business leaders. A gradual, decade-long program of peacefully reintegrating the two cultures should be undertaken, allowing those in the North to gradually see life in the South as something attainable and not evil.
Someone needs to finish the fat bastard off and start signing some trade deals. I say this because the closure of Kaesong is, to put it bluntly, a big damned deal. This is what demonstrates that the North Korean backers of Kim Jong Un have lost their collective minds--this is what hurts the prospects for peace the most. Kaesong should be the wake-up call that gets people talking to those old men you see standing within twenty feet of chubs.

The prospects for war are here and this is what must be avoided. The disarmament of the Korean peninsula alone would be an economic stimulus that would touch off trading and manufacturing that would revolutionize the economies of Asia. And China would have a massive competitor right next door--a win-win for everyone else.
Can you imagine Kim Jong Un as an 80 year-old man, screaming his pathetic threats and wielding his power like a tyrant over his people? What a tragic loss that would be.
on April 03, 2013