Here is Proof That Andrew Sullivan is Utterly Wrong About Everything 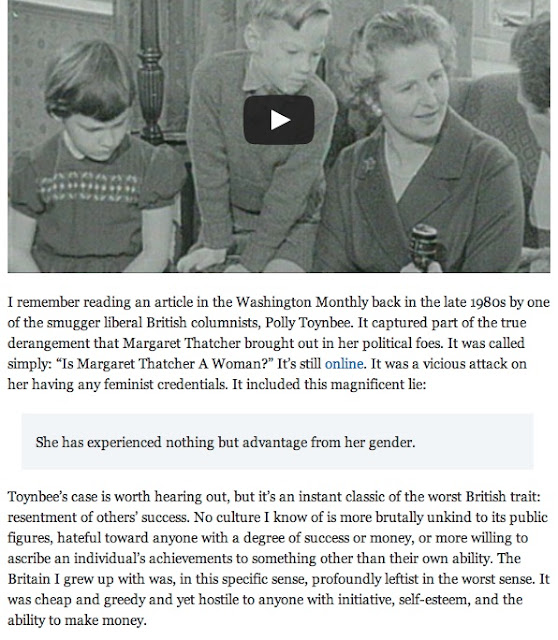 Yes, this is why there have been so many female prime ministers since Thatcher.

In any case, Andrew Sullivan is wrong. Utterly, utterly wrong. He couldn't be more wrong if you hit wrong on the head with the wrong stick and yelled wrong, wrong, wrong until it rang in your ears. He is beyond wrong. He is like the stopped clock giving the right time twice a day--he's still wrong, and wrong in ways that are beyond human comprehension.

If you give Sullivan money to be wrong like this, you're the fool:

Thatcher’s economic liberalization came to culturally transform Britain. Women were empowered by new opportunities; immigrants, especially from South Asia, became engineers of growth; millions owned homes for the first time; the media broke free from union chains and fractured and multiplied in subversive and dynamic ways. Her very draconian posture provoked a punk radicalism in the popular culture that changed a generation. The seeds of today’s multicultural, global London – epitomized by that Olympic ceremony – were sown by Thatcher’s will-power.

There aren't words to describe how badly Sullivan has missed the mark. Thatcher sold the country off to the thieves who raped the economy and lined their pockets with filthy lucre. The poor of Britain are poor not because they deserve to be but because Thatcherism helped keep them down, and trampled them down, and beat them down, and used them as a doormat, and that'll be a poll tax to vote, thank you very much.

Austerity is the legacy of Margaret Thatcher and austerity is strangling Britain right this very minute. A housewife with a mindset from the 1940s who thought the country could be run like a proper household budget informs the global economic posture of a massive economy called Britain thanks to her. Thatcherism, and the attendant horrors it wrought, ruined more lives than can be counted.

Think of the drugs and alcohol that people had to use just to die miserable and in pain because there was nothing worth working for anymore when she was done wrecking everything so the bankers could keep it all. And Sullivan calls it "liberalization?" Please. It was the wholesale selling of the country to crooks at the expense of the poor. A transformation? Absolutely. And a misery-inducing one at that.

If you think Sullivan has anything relevant or intelligent to say from here on in, you're the one who should be examined by a mental health professional.

The man jumped the shark long, long ago. This is not as bad as The Bell Curve, but his lauding of Thatcher ranks up there with screaming down the throats of anyone opposed to invading Iraq. This is the delusion of a man who no longer connects to ideas and facts in the way a thinking, rational person would. This is all about believing he was right when he was wrong many, many years ago. This is nostalgia draped in wishes, hopes, and blind faith.