Chickening Out Over Nothing 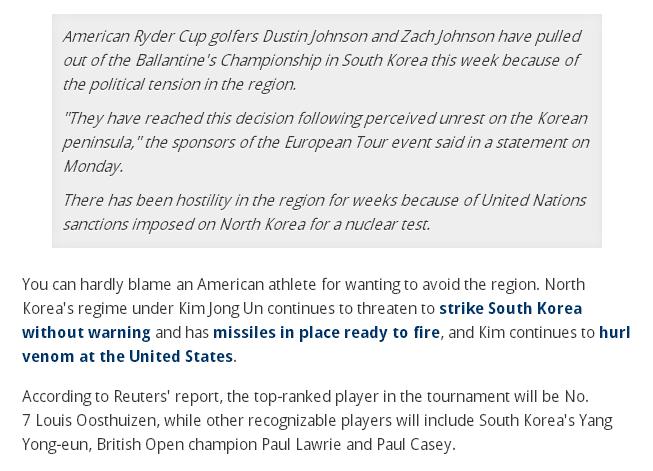 The "political tension" in the region is, in actuality, just the status quo. There has been an elevated amount of tension but a surprisingly calm response from the South Korean government. While these faint-hearted golfers stay home, thousands of Americans are in South Korea right now, braving the ridiculous rhetoric of a North Korean government that is run by a soon-to-be diabetic assclown.

American troops stand watch, ready to defend golfers from around the world. The courses on Kunsan and Osan Air Force Bases are surrounded by fighter planes, armed Airmen, and air defense equipment. There is even an NCO or two who can get a weapon out of an arms room and ride around in a golf cart, presumably when he gets the golf cart properly dispatched and when it isn't raining (for safety reasons, obviously).

The golf course on Camp Walker is near Taegu in the southern part of the country. It isn't fancy, but it is pleasant enough for Army officers. You can still visit driving ranges on a number of Army posts and they don't cost much.

Despite this, and despite the fact that there are American military dependents still in South Korea, these poor golfers still won't come to South Korea and play. They are probably much safer there than anywhere in the Southern United States, but try explaining that to anyone who doesn't live where there are attack helicopters and steadfast Airmen ready to defend the golf courses of the finest military in the world.
on April 23, 2013