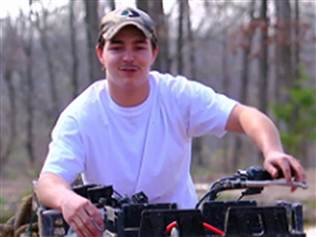 Here are some pertinent details about the death of Shain Gandee:

Shain Gandee, a star on MTV's "Buckwild" reality show, and two others in a truck he was riding in died of carbon monoxide poisoning, the Kanawha County (W.Va.) Sheriff’s Office told TODAY.com on Tuesday.

Gandee, 21, his uncle David Gandee, 48, and friend Donald Myers, 27, were found in a 1984 Ford Bronco that was partially submerged in deep mud with the exhaust pipe completely covered, according to a report from NBC affiliate WSAZ. Shain Gandee was in the driver's seat, according to a sheriff's press release.

Pardon me for pointing this out, but this was just about the stupidest thing I've heard of in a good long while.

People act like this is a tragedy. In a way, sure. It's a tragedy. But for Gandee and the two other men to die like this is ridiculous and sad. If they didn't have the common sense to know that they needed to have a vehicle with an exhaust system that wouldn't become obstructed while "muddin'" then they probably shouldn't have been allowed out in public.

How can you look at this as anything other than social Darwinism or proof that idiots will always do themselves in sooner or later? You have a 48 year-old man in a vehicle with a couple of twentysomethings and, when the vehicle gets stuck, they leave the motor running and allow carbon monoxide to kill one another. They committed suicide without understanding a damned thing about how machines work.

America should not celebrate this kind of stupidity. It should be mocked for what it is and the people making money from Buckwild should be ashamed of taking advantage of mentally challenged individuals.
on April 02, 2013