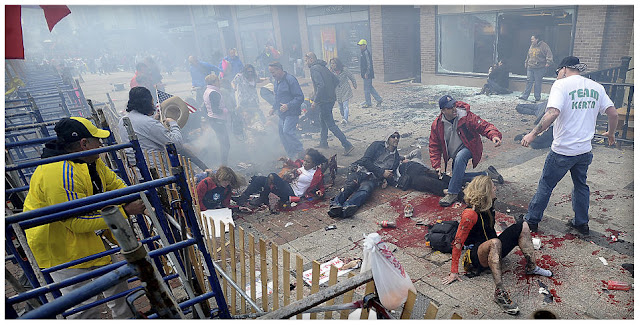 In the aftermath of the Boston Marathon bombing, there was an outpouring of help.

For everyone you see on the ground, there is someone coming to help. There are two or three people coming to help. In moments, these people would be picked up, dragged, carried, wheeled or moved to a better, safer place.

Help is what you get when you have a society where people give a shit about other people. I don't mean to make this utterly crude, but if you have lived your life until now smirking about the misfortunes of others and railing against things like pensions for public employees, welfare for the poor, and Social Security for the old, then I don't think you're going to really, fully understand what it means to give a shit about other people.

Help is something that we take for granted unless we really need it and it isn't there. In the city of Boston, there are thousands of people who work as police, fire, and emergency workers. They work in hospitals and clinics and they volunteer for events like the Boston Marathon. In order to do these things, you don't have to be a saint but you kinda have to give a shit about other people. You have to belong to the community, not just sit on your fat ass and suck the life out of it.

When I heard the coverage, I remember hearing a veteran of Iraq and Afghanistan talk about how the horrors of those places had been brought to this country. The things that this veteran smelled, heard, and felt reminded him of being overseas in a war zone, and yet, he was in Boston, Massachusetts. If that doesn't serve as a wake up call for people to try to start giving a shit about how what we do overseas can visit us here in this country, I don't know what will.

We are told that we go to war overseas to keep us safe at home; that's sometimes right but it is also true that we sometimes go to war just because we give a shit about people in other countries. Well, in some cases, we get lied into a war and we end up wrecking things with good intentions. That does not mean that the people we send to do those things are to blame.

Have we brought our foreign wars home? I hope to hell not. More than a few people noticed that bombs kill people in Baghdad almost all the time. Their lives aren't worth any less than the lives of our fellow Americans. Are there people there who run to help? I hope so. Without those people, our collective idea of society crumbles into ruin. In Iraq, the people who do the bombings are dedicated to the idea of destroying their own country from within. Whoever did this in Boston has either decided to do just that or they're here to bring America's wars home to the American people. Either way, what does that matter to the victims?

Look at them in the picture above. They are stunned and frightened, even as people run to help. What could possibly justify anything they went through today?

Why are we even talking about who did this when we should be screaming about why anyone would ever do anything remotely like this? What could any of this mean when meaningless violence is right there, staring at us in the face? What could anyone do in the aftermath besides help? No one's running to safety; no one is pointing a figure at a possible culprit.

They're helping. That's what matters to the victims. They don't care about anything other than being helped.

In the days ahead, someone's going to make political hay out of this. I don't care who they are--they're going to say something that will be blog worthy. Good for them--I hope they get their moment in the sun. I hope they make people uncomfortable and I hope the money flows into their re-election coffers. I'm positive about people, cynical about politicians, and neutral on who we can blame for screwing up the world.

The bottom line is, we should be highly skeptical of the people who start wars and maintain wars overseas who want to take away our freedoms just to "keep us safe." There isn't anything anyone can do to keep us safe from madmen with guns and bombs. Anyone who wants to give their life doing something insane to hurt others is going to do whatever they can and no amount of legislation is going to stop them.

What they will never stop are the people who rush in to help in the aftermath of such things. When I look at what happened in Boston, I think about the people who helped. They gave a shit today. The people who looked to blame others or demonize American citizens and who, up to now, have never done a single solitary thing to help anyone but themselves should shut up and be thankful that it wasn't them laying on the ground with ball bearings blown into their legs.
on April 16, 2013