Are These The Guys? Can You Trust the New York Post? 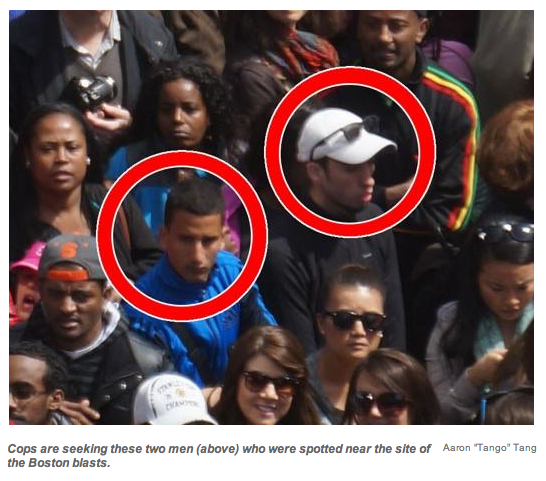 This is what is being circulated by the New York Post. No one will confirm if these are, in fact, the suspects wanted for questioning in Boston.

If the New York Post is wrong, no one should ever trust that news outlet again.

"BAG MEN," the New York Post's front cover brays this morning, underneath a photo of two Boston Marathon spectators. "Feds seek these two pictured at Boston Marathon." After its embarrassing performance on Monday in the aftermath of the marathon bombings, has the Post redeemed itself by scooping the first, much-discussed photos of the suspects?

No. As CBS' John Miller reports, neither man is likely to be a suspect in the bombings, and these are not the pictures of the possible suspects that authorities plan on releasing. But I didn't need John Miller to tell me that— the "persons of interest" in the photos are two local kids who had already been checked out by Reddit and other message-board "crowd-sleuthing" efforts yesterday, and found to be a incredibly unlikely suspects.

As we documented yesterday, the a large and active community of amateur detectives, dedicated to the close examination of photographs of the scene, emerged on the link-sharing site Reddit (and elsewhere) in the aftermath of Monday's bombing. Their efforts were going about as well as you might imagine, which is to say, not very well—lots of MS-Paint circles and lots of near-baseless speculation.

But thanks to their ability to do really basic internet detective work, they managed to figure out pretty quickly that the guy in the blue track jacket almost certainly isn't a bomber. All they had to do was find his Facebook. I was able to do it pretty quickly: He's a Moroccan-American kid, a local high-school soccer player and track runner (possibly he and his friend's track outfits could have been a tipoff that they were actually interested in the race?) who works at Subway and likes How High and The Hunger Games.