Another Win for Gun Dealers in America 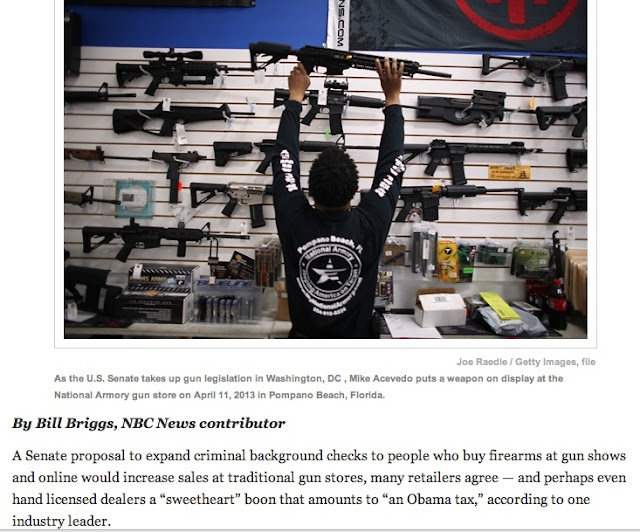 This is absolutely the case in America--when there's a high-profile shooting of almost any kind, gun dealers reap the rewards. They benefit from the fear that the government is going to regulate guns in a smarter way because there is an undercurrent of fear and paranoia around guns that will always exist so long as lobbying groups are able to lie about the government and gun laws.

The gun lobby has constructed a victory that rests on a foundation of dead bodies. Gun violence claims so many lives, no one can fully keep track of how many people actually die every day from accidents, suicides, mistakes, robberies, and intentional homicides. The proliferation of cheap handguns has transformed American society in ways we don't fully comprehend--it does not make for a politer society, it makes for a society where random gun violence is normal in urban areas. And yet, people in rural areas continue to stock up on guns and ammunition, fearful that they will be cut off.

How about a $25 tax on every box of ammunition? How about a $50 tax on every handgun being sold today? Would that help? No, of course not--people would still buy the ammo and the weapons, and they would line the coffers of the same government that cannot sensibly regulate a dangerous product. Guns are merely a consumer product that is not properly regulated in this society. Legal? Sure. But properly regulated and controlled as a dangerous item? Of course not.

That would take a courage we don't see from the people who purport to lead America. They are addicted to campaign contributions, and this money is soaked in blood.
on April 13, 2013