A Revival No One is Clamoring For 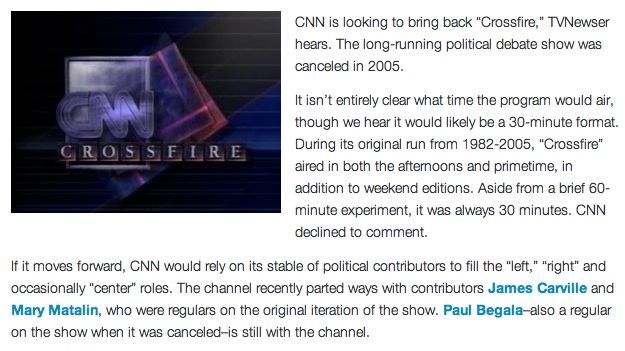 The possible revival of Crossfire would help Washington insiders push the idea that "both sides do it." The problem is, that explanation simply gives people cover so that they won't hold the Republican Party accountable for trying to destroy the American economy.

CNN is out of ideas and no one knows how to get people to watch unless there is actually something terrible happening in the world where everyone is focused on watching in order to experience a shared, collective version of an event. It's actually a good thing when no one is watching the news--that means we're not going through a national trauma together. We're less informed, however, about day to day things that can actually affect our lives. The people who run news organizations should accept the fact that they are going to go through periods where no one cares about what they're putting out there. Inventing fake controversy won't change that.

Crossfire was a show about fake controversies. It employed people as caricatures of what a conservative and a liberal were supposed to be about. Set against the backdrop of the Reagan-Bush years, every discussion talked about how Reagan restored America's greatness while bankrupting the country. Liberals were weak, conservatives were pro-military, and fighting communism had made us winners. A more subtle and detailed look beyond that simply did not fit the format then being used. It was little more than a nightly regurgitation of conventional wisdom and no one really could come away with "information" from a confrontational opinion show.

Information is what is missing from television news. Tell what is actually happening and what the actual consequences of government policy really are rather than give inflated opinions and try to balance it with a look at how government always fails. That's what's really tired about CNN's approach--it has failed to inform and it wants to get back into the business of opinion journalism so that no one can get what they really need.

Someone somewhere needs to employ pundits because pundits reassure the power structure that what they believe is actually the truth; CNN wants to be a part of that process because actually informing the American people about what is actually happening doesn't lead to ratings. Sensationalism, and the attendant screaming matches and sneering asides, are all that matters to people who want to make money off of news. Information is dead. Confrontation is king. And pushing the "both sides do it" line is what CNN thinks will make them money.

Let them employ their circus clowns and restart the circus act. It's not anything I would ever watch.
on April 06, 2013