A Culture War Against Contractors Who Don't Follow Instructions 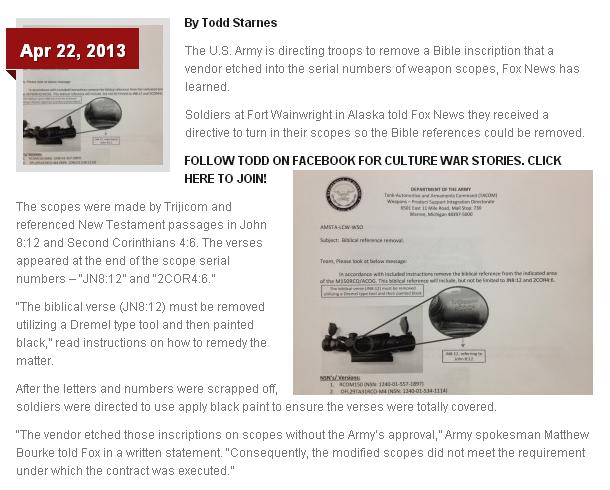 This was an issue several years ago, and now it has popped up again because, well, we have to show America how the libruls are hating Jeebus and ruining our military.

The problem is, the contractor added something to a deliverable that made that an issue for the government. See how far you'll get by ignoring what the government tells you when you are on the hook for a massive, lucrative contract to deliver something as specific as a scope.

The military doesn't want to deal with the controversy; they want a scope that meets their specifications and doesn't "add" anything that will throw unwanted attention towards something they are paying a lot of money to acquire. The beauty of our military is that it is full of people from all walks of life, some of whom don't believe in God, and we accommodate them because our society is dedicated to protecting the rights of the minority.

People can make this about religion all they want, but it really does come down to making the government happy when they're spending huge amounts of money to get a product from a company. You either meet their standards or you go back to doing business in the private sector. It really is that simple.
on April 23, 2013