A $250 Million Dollar Monument to Failure 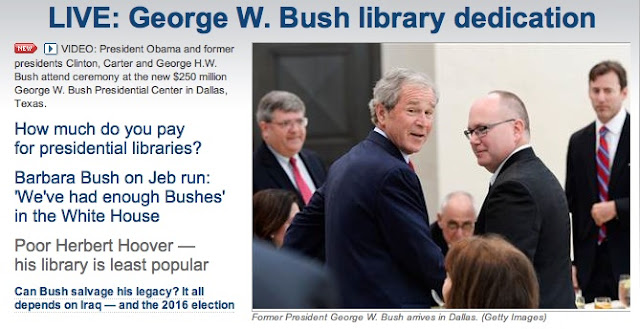 The greatest failures in American history were the election and subsequent re-election of George W. Bush. No two decisions have ever hurt the American people more in terms of lost opportunities, the ruins of war, and the collapse of the American economy. Choosing Bush over Gore and Bush over Kerry meant ruin and failure and so, today, we see the first attempts at salvaging the careers of those who propped up Bush.

His administration was an abject failure. It destroyed American foreign policy achievements, wrecked our military, ruined our economy, and left us with debt, division, and misery. Bush was worse than Herbert Hoover and he was worse than any president ever, up to and including anyone who you can think of. No other president left us with such devastation. He was the plague, and people are still shaking it off, trying to get the sores and the bumps left behind to fade away.

The media are complicit in the selling of Bush as a decent man. That is irrelevant. He was an incompetent man, and being nice to the plebes and backslapping with the commoners is irrelevant in any meaningful discussion of his legacy, which is a legacy of shame and failure. They spent $250 million dollars building a monument to folly that the American people can visit any time they want. They might as well have built it on the deck of the Carnival Cruise ship Triumph, and I hope someone remembered the Mission Accomplished banner.

Seriously. Where's that banner and why doesn't it hang over the entrance to the Bush Presidential library?

Trying to salvage the Bush legacy is like pounding sand for the staffers and appointees. They know that their ties to Bush will likely cost them future earnings. They know that having a Bush 43 marker on their resume is like showing a conviction for a sex offense when trying to get a job protecting public safety. They know they have to rehabilitate Bush's legacy for him because, well, he has never cared what anyone thought of him. Bush's sole rationale for running for President stemmed from the fact that he wanted to be commissioner of baseball one day. If anyone wanted to take bets on that eventuality, I would refer them to the line in Vegas. Once Bud Selig is finally gone, I'm guessing Bush will take the job.
on April 25, 2013