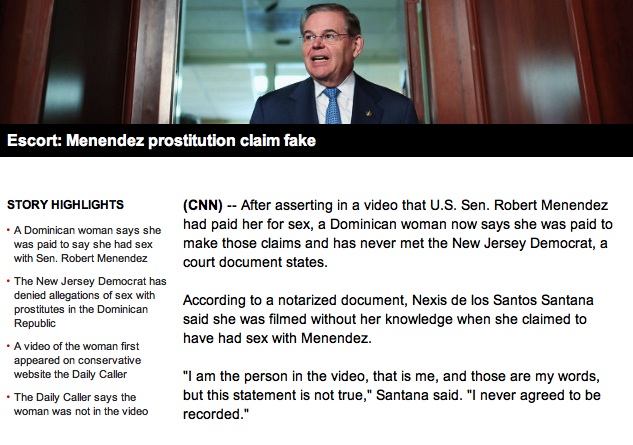 A number of people are tracing these efforts to oust or embarrass Senator Robert Menendez to a cabal of Republican operatives in Northern Virginia who are getting their message out through Tucker Carlson's Daily Caller website. Somewhere in here are criminal charges and a lawsuit. Paying a woman to lie about having sex with a sitting United States Senator is legal now? A good idea? A way to make your web site take off?

I purposefully ignored these stories; not because Menendez is honest and decent but because he's from New Jersey and I don't care about Bob Menendez or Jersey politics. I ignored these stories because they emanated out of the sleaze merchants who trade in this sort of trash. I ignored this because Tucker Carlson is a blight on society, a fraud, a race hustler, a clown and a sad excuse for an ethical human being. He represents everything that is destroying the information culture of this country. The beneficiaries of the destruction of reliable information would be found entirely within the Republican Party, which is fast becoming a regional, marginal party of extremists. The Daily Caller has a business plan which caters to such margins.

Menendez is fast becoming a saint who stands on top of a whole pile of questionable decisions and favors done for others; he's probably no better or worse than anyone else who holds down a similar place in our political culture right now. How is he any worse than David Vitter, who still holds a seat in the United States Senate, has actually, you know, frequented hookers, and has not been targeted by the Daily Caller's morality cops? I mean, honestly. Tucker Carlson is going to dictate morality to the people of the United States of America? What the fuckity damn fuck?

Perhaps Menendez should bring Vitter out in front of the cameras with him, lock arms with his colleague from across the aisle, and sing the praises of paying for sex. It would shock people in places like New Jersey simply by being honest.