The Two Most Irrelevant Men in America 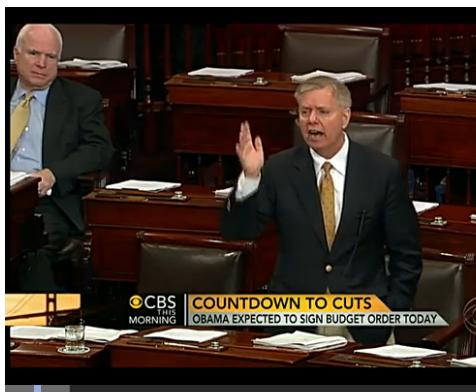 When I was passing over some news items (I will not bore you with the sequester and all of the nonsense that goes with it), I was struck by this image from the live proceedings in the United States Senate.

Here you have Senator Lindsey Graham and Senator John McCain, holding forth in their yellow, cowardly ties (well, gold and beige, maybe) and with the empty desks around them indicating that there are no senators who wish to be seen with them on the floor. These men are irrelevant in American politics.

There are no legislative initiatives that either one of them or both of them could conceivably put forward with their names attached; there are few, if any, colleagues who would work with them on any issue. McCain is despised in the Senate and Graham is his lap dog. No one believes that Graham will hold his seat much longer; South Carolina has had it with him. Voters in Arizona have about had it with McCain as well.

When they talk about domestic issues, they are revealed as fools. They don't care about any of that crap. These are foreign policy senators; they talk about world events with high language and they demand that the television press will listen to their remarks. No one in a foreign capital cares what they have to say because McCain and Graham, aside from having seniority enough to stay on certain committees, have no base of power. They could not derail Chuck Hagel (they did get Susan Rice, in larger part because they had some support from the Republican caucus), they can't get the President's ear, and they are treated as buffoons when they go on junkets.

McCain and Graham are marking time until they have to resign or end up being thrown out of Congress. Their time has passed; they are never going to hold a higher office than what they hold right now. About all they can count on are limited hit-and-run victories that happen because their colleagues want to use them as useful idiots. Why the national press keeps putting them on television is entirely because no one has taken the time to adequately destroy their careers yet.
on March 01, 2013