Josh Trevino Was On a Malaysian Entity's Payroll 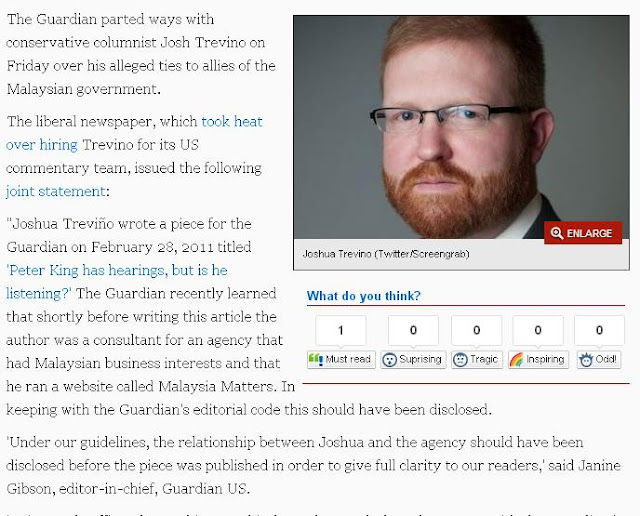 Do you recall what happened to Joshua Trevino, the conservative columnist who was fired from the Guardian because it appeared to everyone concerned that he was on the payroll of the Malaysian government and did not disclose this fact? Well, Trevino asserted at the time that he was "never on any 'Malaysian entity's payroll" when the veracity of his writing was questioned.

It turns out, Trevino was lying his ass off:

According to Trevino's belated federal filing, the interests paying Trevino were in fact the government of Malaysia, "its ruling party, or interests closely aligned with either." The Malaysian government has been accused of multiple human rights abuses and restricting the press and personal freedoms. Anwar, the opposition leader, has faced prosecution for sodomy, a prosecution widely denounced in the West, which Trevino defended as more "nuanced" than American observers realized. The government for which Trevino worked also attacked Anwar for saying positive things about Israel; Trevino has argued that Anwar is not the pro-democracy figure he appears.

The federal filing specified that Trevino was engaged through the lobbying firm APCO Worldwide and the David All Group, an American online consulting firm. The contract also involved a firm called FBC (short for Fact-Based Communications), whose involvement in covert propaganda prompted a related scandal and forcedan executive at The Atlantic to resign from its board.

According to the filings, Trevino was also employed to write for websites called MalaysiaMatters and MalaysiaWatcher.

Trevino's subcontractors included conservative writer Ben Domenech, who made $36,000 from the arrangement, and Rachel Ehrenfeld, the director of the American Center for Democracy, who made $30,000. Seth Mandel, an editor at Commentary, made $5,500 (his byline is attached to the National Review item linked to above). Brad Jackson, writing at the time for RedState, made $24,700. Overall, 10 writers were part of the arrangement.

Another day, another wingnut welfare recipient faceplants on the ground.


Why you would take money from a foreign government and risk your credibility as an American conservative commentator is beyond me. The path from this kind of behavior leads nowhere--once your credibility is gone, how do you get it back?

You don't. And, really--the people who did this--they never had any credibility to begin with. And what they have now is a huge, huge mark against their name. They are toxic entities, and no one should employ them (unless they want to be known as the media outlet that hired the guy who lied about being on the payroll of an unpopular, sadistic foreign regime).

In Trevino's case, this couldn't have happened to a nastier piece of work. His smug sense of entitlement earns him a special place in wingnut welfare hell. Perhaps he can work as the errand boy of James O'Keefe or Sarah Palin.

Oh, and maybe someone can track down Chuck DeVore and ask him some pertinent questions:

In a blog post for Andrew Breitbart's BigPeace.com,[35] DeVore criticized Secretary of State Hillary Clinton for seeking to meet with Malaysian opposition leader Anwar Ibrahim. DeVore accuses Ibrahim of having ties to Muslim Brotherhood, but at a speech at the Woodrow Wilson Center in June 2010, Ibrahim spoke favorably of a two-state solution,[36] something the Muslim Brotherhood adamantly opposes. DeVore came under criticism from noted human rights advocate, Thor Halvorssen Mendoza for not criticizing the oppressive Malaysian regime and for directing all of his attention to Ibrahim.[37] [from Wikipedia]

Trevino was DeVore's spokesman at what appears to be this same time; here you had a man who was on the Malaysian payroll using a Republican candidate's campaign for the United States Senate to criticize the Secretary of State. Why a Republican would allow himself to be associated or tainted by someone like Trevino when they're running for the Senate is beyond belief.

This is the part that is so shocking--Trevino was so far in the bag for the Malaysian regime, he had no hesitation about getting the candidate he was working for in on the corruption as well. Did this break any laws? Does DeVore now have to amend his filings and admit that he, too, was lobbying on behalf of a foreign entity while running for the United States Senate? Had DeVore won, and if he was a sitting United States Senator right now, the association of Trevino with the Malaysian government would go off like a bombshell right now.

Why does Joshua Trevino hate America? A foreign government paid him to defend that regime in the American media. The man Trevino was helping get elected to the Congress used his position to criticize the Secretary of State. Commit an act of treason against your country much? Goddamn.

Anyone who employs Joshua Trevino from here on out should be forced to answer questions about Trevino's conduct when he was in the employ of Chuck DeVore.
on March 01, 2013