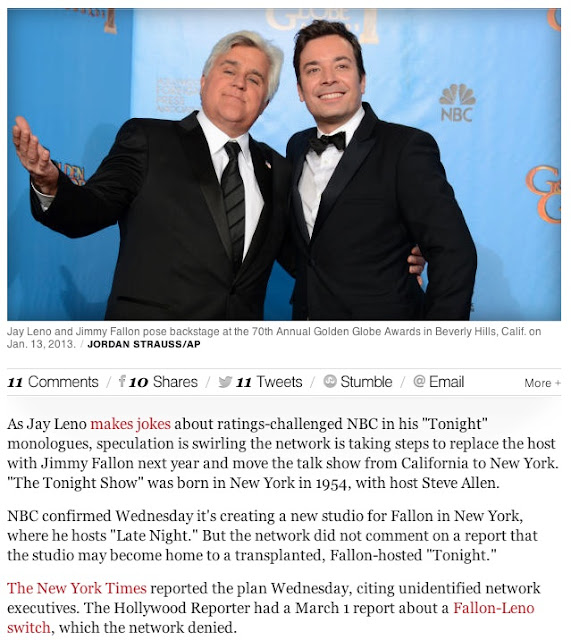 I've read several stories about the supposed switch that will make the Tonight Show a Jimmy Fallon property, and I simply don't think it's going to happen the way anyone wants it to happen. Jay Leno now has plenty of time to make himself impossible not to keep happy.

The problem is not well understood. The television industry now has to figure out how to deal with the value of shows that generate clips that people watch for free on Google's YouTube and other outlets. If you're NBC, and you're producing Jimmy Fallon's show, no one is watching it. The ratings are tiny because it airs late at night. But when Jimmy does a bit on the show that is really, really good, people will go to his website at NBC and watch the clip. Then, the clip will be traded around or moved around onto other platforms, further diminishing what little revenue can be generated from bringing a person who wants to watch television to Fallon's website. Playing an ad before the clip does make a little money, but it detracts from the experience. Someone will just cut the ad, edit the clip, and put it on YouTube and run their own little ad under it. The technology is such that anyone who sits through the ad is not engaged with the ad anyway; they're patiently waiting for the interruption to stop. But the guy who gives you the clip without the ad wins, and is thus rewarded with hits that should have gone to the people who made the content in the first place.

But the value here is that bit, that little clip of Jimmy doing something entertaining. He and his show should get paid for that, but the payment they get for such a small segment will never cover the full cost of putting his show on, year round, in the current parameters of the televisions business.

The structure here, is the problem. You have a diminished experience watching slices and bits and clips of shows and advertisers know this. Why would you advertise to be on any show when all anyone wants to see is the portion of the show that your ad will never appear in? The past model meant that you sat down, you watched television for about an hour, and advertisers had several chances to expose you to their products. This enriched the program and the network because they developed a medium that made it enjoyable. Now, you don't care about anything other than the GIF or the spit-take or the musical bit; you just want to see that and you want to move on to something else. How are you, as an advertiser, supposed to keep paying for that?

So, what's happening here is that NBC is willing to start a war with a master manipulator of business executives, Jay Leno, in order to build a new studio for a show that won't get great ratings because of when it airs so that people can sit at work and watch edited clips of what he did the night before.

This is what you're going to spend millions of dollars doing?
on March 21, 2013