Having an Election in March is Stupid 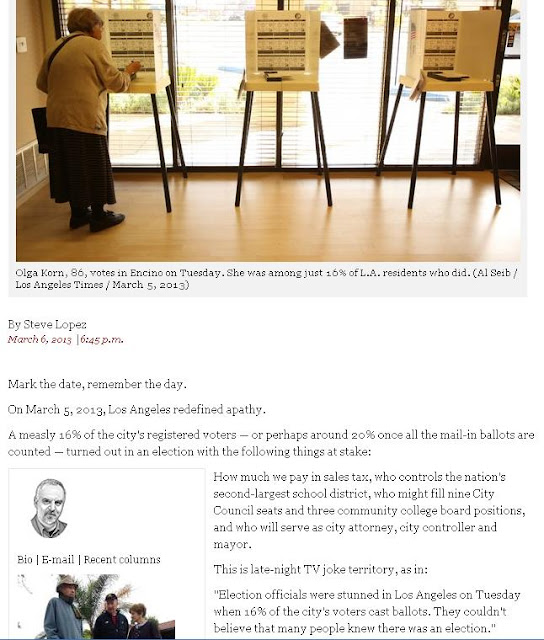 Before anyone freaks out, this is the problem. The City of Los Angeles held an election yesterday, and nobody showed up to vote. With a turnout of 16%, that should not even count as primary election much less an actual election of candidates to hold office. It's a disgrace.

But the disgrace is not with voter apathy. The disgrace is with those who gamed the system and set up the March election in order to rig the results and ensure a low voter turnout. When Steve Lopez says this:

One idea would be to time mayoral elections so they're on the same ballot as presidential elections instead of a few months later. It seems to me that a mayor has more impact on our daily lives than a president, but national elections draw a lot more Angelenos to the polls.

"One" idea? How about the only damned idea worth positing, my friend?

It's bad enough to hold elections in "off" years; it's the law of the land that says that we must elect our Congressional representatives (and a third of the Senate) in the mid-term election between Presidential elections. But it is absolutely asinine to suggest that holding an election in March is anything other than a direct appeal to apathy, low turnout, and low voter interest or awareness.

Whoever picked March 6, 2013 as election day knew exactly what they were doing; they got the election they wanted when 16% turned out. Everything other than that is just complaining about the obvious.
on March 07, 2013