A Gilded Age of Wonder and Excitment 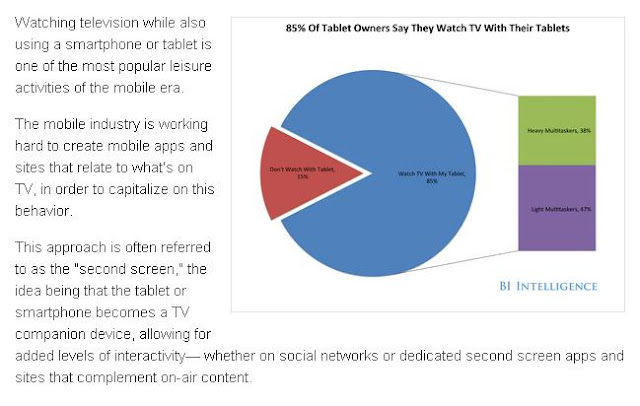 It used to be that a "TV companion device" was another human being or maybe a dog. Cats are not really interested in television, but they are interested in diverting attention away from whoever is watching. Birds make great TV companion devices. They don't do much, keeping distractions at a bare minimum. When television gets boring, send cat after bird, or, if you're really into the immediate moment, send the bird after the cat. How could you possibly watch anything on TV while a cat and a bird fight it out before your eyes? That's the immediacy of life, and that's what is disappearing, rapidly.

Any device that distracts from watching television cannot have come at a worse moment. Now, you actually have to pay attention. Now, you can't let the story go for any amount of time without concentrated viewing. We have abandoned decades of formulaic television in favor of plot and character driven shows that weave story lines of an incredible, cinematic complexity.

This would explain the growth of the companion device. There are, in any given episode of a critically-acclaimed show, moments when you have to reference previous incidents and the quickest way to do that is to search out intelligent commentary. And while this is also a sad commentary on creativity--having to look up something on the Internet so that you might have a clue as to what just happened in front of you and whether or not to like it--it's not the end of the world.

The picture-in-picture capability of most televisions now opens up an alternative possibility--the establishment of a portal to the Internet being available right on screen. This would please advertisers, I would imagine, because that would leave your engagement fixed squarely on what is in front of you as opposed to what is lingering at your fingertips. How long before someone figures this out? How long before a television service provider can figure out how to turn part of your television screen into a tablet device with a direct wireless connection to the Internet? How long before you just sit with a keyboard in front of you?

Information is delivered in so many new and exciting ways. The cliche of it all is that we are constantly being amazed by technology that simply cannot replace actually knowing something. If you already have a working knowledge of the culture, you are probably less likely to have to deviate from what is holding your attention and tap on a tablet or scroll through reference material.

Is this really a good thing? It probably is. Hating technology is as old school as losing the remote.
on March 07, 2013