You Have the Right to Shame Someone For Being a Dick 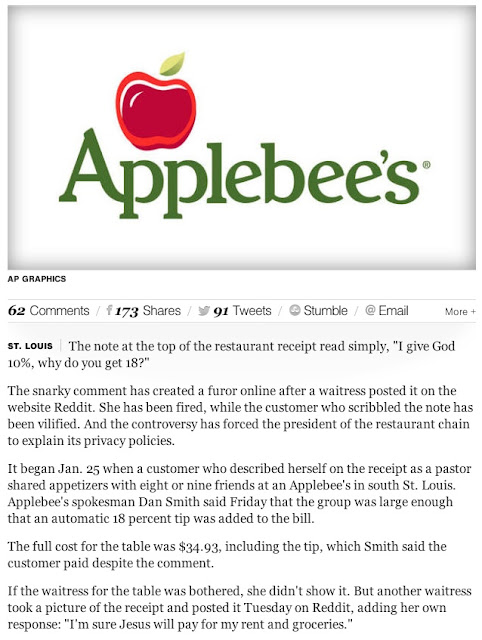 At the heart of this story is the right to use social media to shame someone who is being a dick.

Do we have that right? As a people, do we have the right to use social media as a tool to right wrongs and address the bad behavior of people who take liberties with others?

I think we do have an expectation now that people who don't have a voice can still be heard and that America is a better country when there is no class structure keeping one group over another group. That may seem like a pipe dream, and it may be more realistic in theory rather than in practice, but it comes down to addressing the idea of what happens when technology flips society around, allowing voices that would normally have been silent to actually be heard.

America works when injustices are corrected and addressed head on.

So, when a waitress is wronged, and uses social media to get back at the person who is being a dick, why is it that the restaurant inevitably fires the person? That seems to be the result no matter what. The restaurant should really stand behind the person--their own employee, for crying out loud--who has been wronged. If it means that dickish people won't eat there for fear of having their dickheadedness exposed and addressed, why is that a bad thing? If restaurants can hate people for being gay, why can't restaurants hate people for being rude and ill mannered?

Serving more than eight people in a restaurant means a hell of a lot of work, and when that "pastor" refused to give that person a tip, they engaged in a level of dickishness that should not be tolerated in our society, especially at a time when making ends meet gets harder and harder every day.

The pastor brought God into the mix and revealed something hideous in the American character--a sense of entitlement and self-satisfaction at the expense of others. That is the confusion that comes with having an ego larger than realizing that there is an acceptable way to treat others. I'm all for using shame to fight such a thing. It's a fight that we need to have.
on February 02, 2013