The State of Race Relations in America

There are a number of startling things that have happened recently, and I think they speak to the state of race relations in this country.

First, you have the wonderful example of a Mr. Joe Rickey Hundley, who slapped a child after calling the child a "nigger baby." 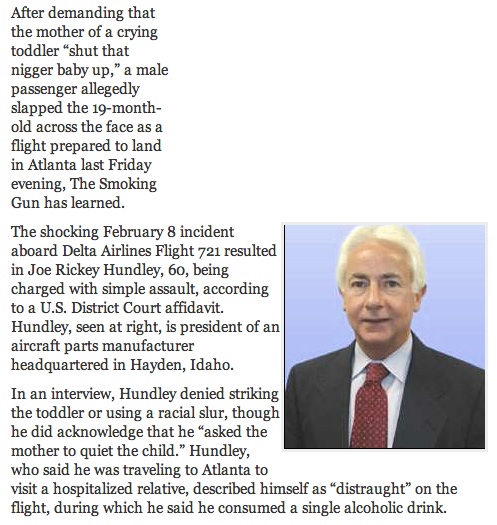 Then you have the example of what happened when Academy Award winning actor Forest Whitaker decided to walk into a deli while being black: 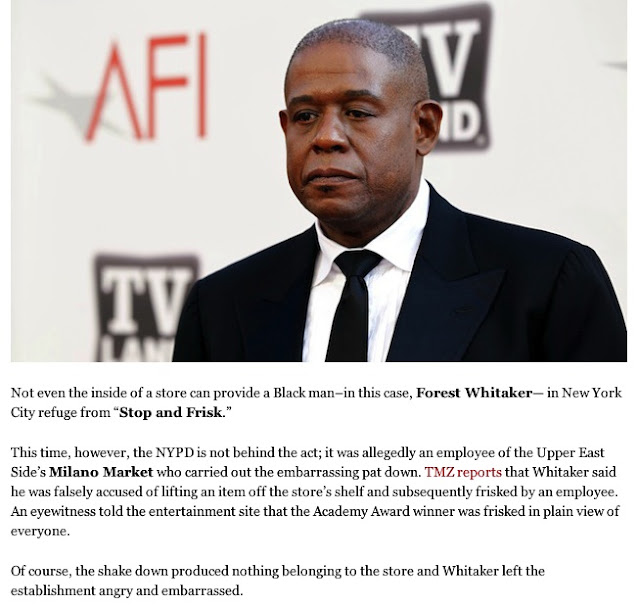 The next time someone says that we don't have a problem with racism anymore, tell them to go read something other than Fox News for a change.

I have a hard time believing that someone like Joe Rickey Hundley just decided to slap a child after one drink and that this is the first time he's had an "issue" with other human beings. He sounds like a man who has some strange ideas about how to conduct himself on an airplane. Why was he flying to Atlanta in the first place, by the way? Doesn't he know that Atlanta isn't as white-bread as Idaho? Doesn't he realize that he might, perish the thought, have to put up with noises from the children of other people while flying into a major American city?

Who can't recognize Forest Whitaker? This man has been making movies since the late 1970s. He's been in so many movies and television shows, you'd think someone would recognize the man and say, "no, I'm not going to frisk this guy." You'd think someone would just have the decency to say that, especially if they DID NOT see him TAKE ANYTHING out of BASIC HUMAN DECENCY but that's besides the point. What a disgrace. No one should frequent that business ever again.

Then there's the case of one Dale Peterson, a man who actually did steal some items (well, he went PAST the cash registers without paying for his items) and how he's going to get the charges dismissed (probably?): 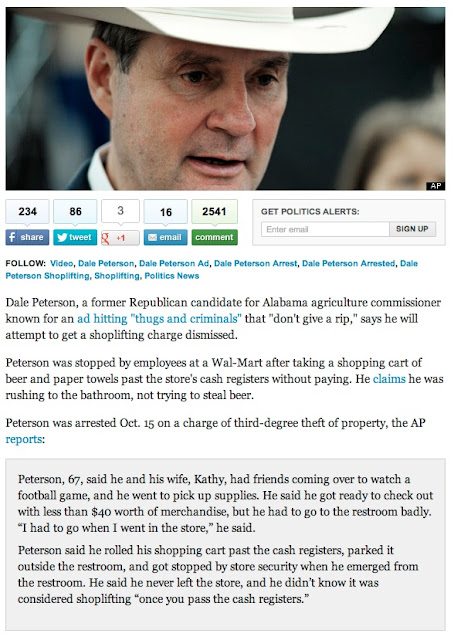 The problem here is that Peterson is probably not going to be charged with anything, and that he will engender more sympathy for what he did precisely because of his race. Never mind that he "had to go" when he went into the store, was in a "hurry," and was trying to buy (or steal) some beer. He'll probably get off with a slap on the wrist. Compare that to the example of Whitaker, who was just being a black man in the wrong place at the wrong time and wasn't trying to steal beer while not being able to manage his own bathroom issues.

Oh, and then there's this gem:

A nurse is suing a hospital, claiming it agreed to man's request that no African-Americans care for his baby.

The lawsuit accuses managers at Hurley Medical Center in Flint of reassigning Tonya Battle, who has worked at the facility for 25 years, based on the color of her skin.

The man approached Battle, while she was caring for his child in the hospital's neonatal intensive care unit, asking to speak to her supervisor, according to the complaint filed in January by Battle's attorney.

She pointed the charge nurse in his direction.

The man, who is not named in the filing, allegedly showed her a tattoo that may have been "a swastika of some kind" and told her that he didn't want African-Americans involved in his baby's care.

This country has some problems right now and no, they have nothing to do with illegal immigrants, terrorism or the deficit. Our problems run a little deeper than that. You can't read these four stories and not come away with some sense of where we are headed, and it ain't looking too great.
on February 16, 2013