The Phony Outrage Over the Marines at the Inaugural Parade 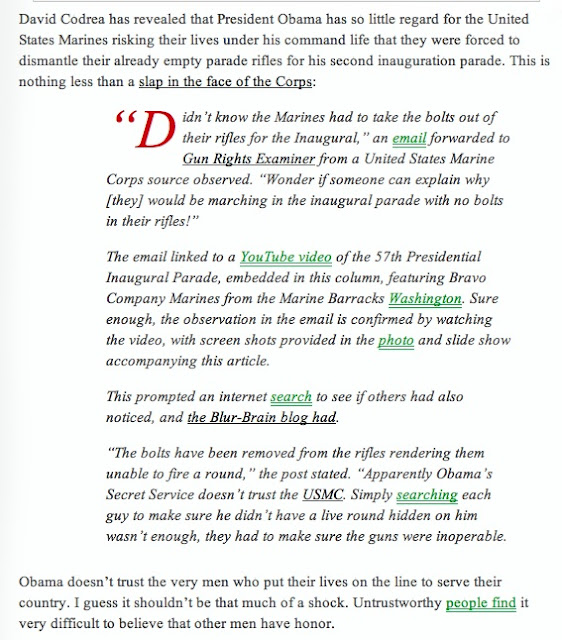 Crazy Bob Owens (who used to call himself Confederate Yankee) thought he had found something to blog about when he linked to a nonsense article here and the Examiner's "gun rights" page. Sorry, but it's a big nothingburger.

Ceremonial rifles are, by and large, just that. Pictured above are US Army soldiers using weapons that appear to have been modified and appear, at least to me, to have no bolt in them. Firing pins are another matter--if they have been removed, you couldn't possibly see that.


You cannot see if the firing pin has been removed because it is not visible.

No one has "dishonored" the Marines who marched in the Inaugural Day parade. They carried M1 rifles that didn't have firing pins in them because, well, that's what you do with a ceremonial weapon. Here's a fact about the Old Guard (the 3rd Infantry Regiment) that performs ceremonial functions in Washington D.C. among other duties.

Today, the M1903 remains in use with several military demonstration units, including the U.S. Army Drill Team, a specialty platoon of the 3d Infantry (The Old Guard). It is also used by several ROTC and JROTC drill teams, although almost all of these rifles have been modified so they cannot fire.

I would hazard to guess that the M1s carried by those Marines were disabled a long time ago, or modified for safety reasons that had nothing to do with the fact that they were being carried in the parade.
If that's not the case, then the most plausible reason I can think of is that someone decided that having Marines or soldiers or whoever carrying weapons in a ceremonial parade that could fire was a damned stupid thing to begin with, given that there were already hundreds if not more than a thousand heavily armed men and women in tactically advantageous positions all around them anyway. Why would you want someone--anyone--who is not part of the protection detail to have a weapon that could possibly fire, even if by accident, and cause a panic with so many civilians around.
Oh, and then there's this:
on February 11, 2013