The Obvious Grifters on the Right 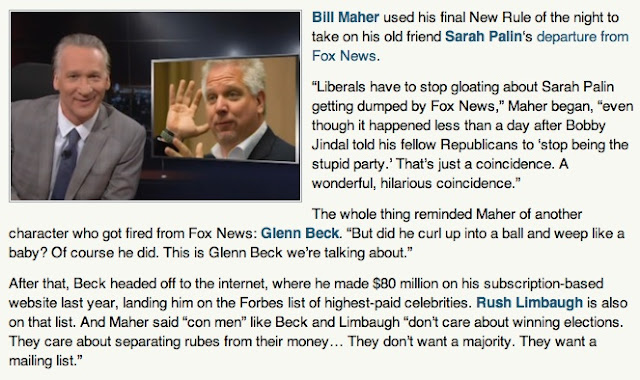 Bill Maher is largely correct here, but very few con men succeed on such a grand scale without having a whole lot of help from enablers and handlers and those who make money from the crumbs they leave on the table.

Media organizations cater to the Becks and the Limbaughs primarily because they bring in viewers and readers and hits for websites. This is the circular firing squad or the "circle jerk" that keeps everyone fat, dumb and happy while informing no one. It works like this: a conservative reacts to something that is in the news or to something they have found, and they react in such a way as to make the incident explosively interesting with all the hallmarks of a good media troll. They lie, sensationalize, and do so in a profoundly calculated way. They do it because this is what people on the rightwing spectrum desperately want to consume--this is troll bait.

The complicit media organization then amplifies the troll bait material, garnering viewers for themselves by feeding the outrage. Instead of simply ignoring or mocking the piece of troll bait, they legitimize it by giving it a fair hearing or by saying, "both sides do it."

Both sides don't do it. There are far fewer trolling organizations on the left spectrum because the right spectrum of American politics is sustained almost entirely by ignorance and fear. Ignorance and fear are not left wing states of mind--being engaged, informed and active are more in line with being a liberal these days, although a healthy dose of lethargy and self-importance can be found there as well.

Anyone who expands a bit of troll bait material into an actual media story is simply hoping to profit from the ignorance of others. This activity should, theoretically, cause others to suggest that their broadcast licenses be revoked out of concern for the public interest. But that concern is largely absent now that we have had no working media watchdog organization--the Federal Communications Commission--for decades. An actual, functioning FCC with actual bite and consumer's interest at heart--pair that up with actual power and with a governmental organization that can protect the public.

Who wouldn't want that? Well, the grifters would lose their ability to grift. And we couldn't have that, could we? This is why we don't have nice things.
on February 02, 2013