Seeking, But Not Necessarily Finding a Comfortable Arrangment 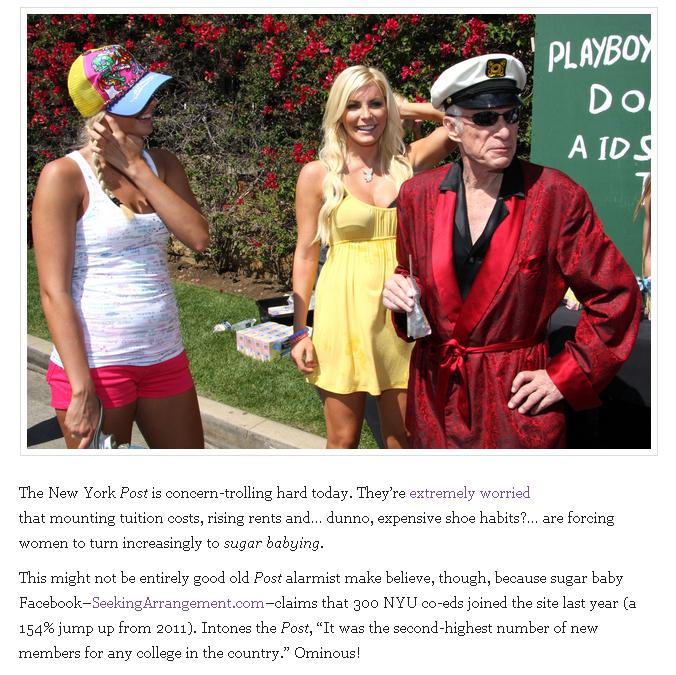 And, from there, you can see the development of a new trend in society--one where young women seek comfort from older, financially successful males.

What's new is that someone has figured out how to use Facebook to put a name and a face and some numbers to this phenomenon. Seeking out status males for security is as old as, what? Human civilization? As common as other forms of human behavior when it comes to seeking out arrangements that are beneficial to all concerned?

So, the foregone conclusion that this has meant anything other than an increase in the way that Facebook is being used could very well be wrong. Incidents like this don't always add up. They lead to misguided conclusions based on indicators that don't necessarily travel from point A to point B. They lead to conclusions based on inductive reasoning. As in, why aren't more parents concerned that Hugh Hefner is going to marry their daughter after she gets breast implants?

Hugh Hefner has courted and married a number of women with breast implants. Logic says that this is the key indicator of what can happen when he decides to seek out a new mate. If you keep your young-adult aged daughter free and clear of such things, chances are, Hugh Hefner probably won't marry them. This is how logic works, I guess.
on February 21, 2013