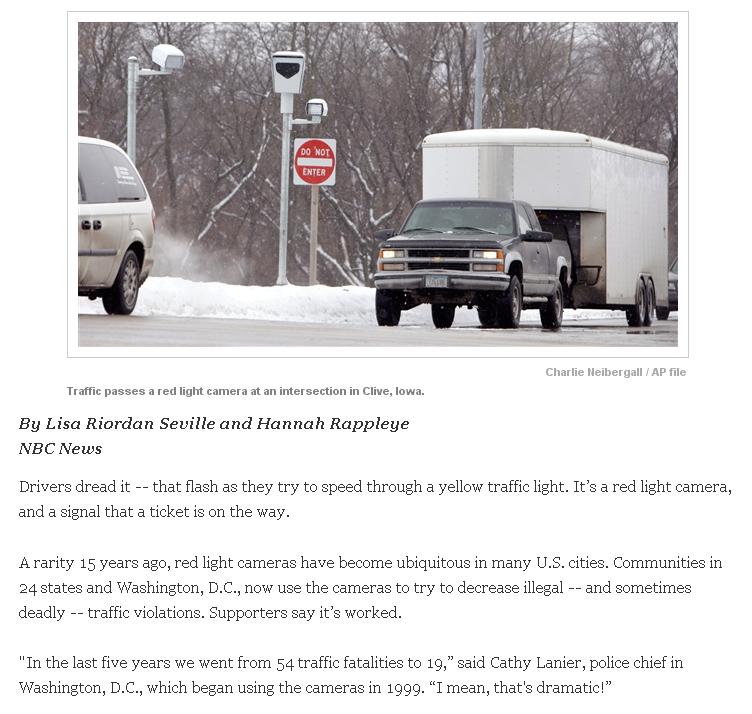 In almost every defense of the presence of red light cameras or speed cameras, you will hear an official touting public safety. The problem is, exactly how many of the reduced fatalities from car accidents can really be attributed to red light cameras and how many are the result of getting older, deadlier, and larger cars off of the road in favor of smaller, safer ones?

The simple fact of the matter is, the speed camera and the red light camera are not the only reasons for a decrease in traffic fatalities. They may play some part in changing the behavior of drivers, but I think it is far more likely that the vehicles themselves have played a part in reducing fatalities simply because modern airbags work much better than they did ten or fifteen years ago.

Speed cameras, in particular, are often wrong. This article discovered that, not only did the speed cameras in Baltimore, Maryland not work, they were responsible for driving politicians to manipulate public opinion in favor of continuing to reap the fiscal rewards. So much for caring about reducing traffic fatalities.

I'm not a fan of the speed camera, nor am I a big supporter of the red light camera. Both have some measure of justification--public safety--but, really, their popularity comes from the passive nature of their use by law enforcement. They are surveillance tools--they replace a human presence with a machine that is designed to enrich a municipality. They are often hidden when used, such as in Germany (I have seen workers in Landkreis Boeblingen and Calw using cut grass and branches to conceal mobile cameras by the side of the road) and I have seen them on my return to the United States, more popular than ever.

The use of these devices for unintended reasons--compiling their images as evidence against people in cases not related to public safety--is a violation of privacy laws. This has led to the justification of all manner of surveillance activities and the ubiquitous presence of cameras all over the place. Next comes drones. When does it stop?
on February 19, 2013