Dave Foley Can't Have an Opinion? 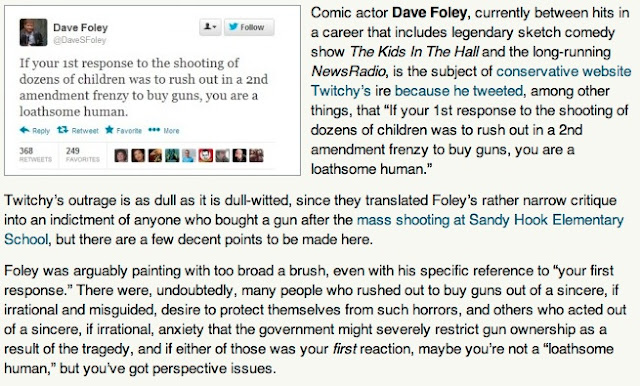 Each and every time someone says something that conservatives disagree with, they resort to bullying and intimidation to try and silence them. This is what's going on and if you can't call it what it is--violence of another stripe, encouraged by the Internet and sanctioned by people who have no ideas--then you need to get out of the idea business to begin with. The right of people to have an opinion about guns is entirely their own. If you are opposed to gun control, guess what? You have that right. You may be wrong, but you have the right to your opinion.

The same goes with people who think we need to find a common sense way to make the country safer by keeping guns out of the hands of crazy people. If you can't get behind that idea, then you are fairly loathsome, and you are fairly out of the mainstream of political thought right now.

Gun control is going to happen; denying that fact isn't going to magically take us back twenty years to a special time when even muttering about gun control was enough for the National Rifle Association to drop several hundred thousand dollars on an obscure Congressional race. We live in a different time now, and we are headed in another direction. Don't like it? Fine, you're entitled to your say. But that doesn't mean you're going to get away with bullying people.

The idea that Dave Foley--one of the most genuinely funny people in the world and really talented writer and performer--can't express an opinion that is humanistic, liberal, and based on common sense and passion is exactly why the conservative movement is losing in virtually every effort imaginable to defend the right to bear arms in America.

No one is attacking the actual right to bear arms. What is being attacked is the inhuman, loathsome belief that bearing arms gives you a right to shoot people who haven't even attacked you.
on February 04, 2013