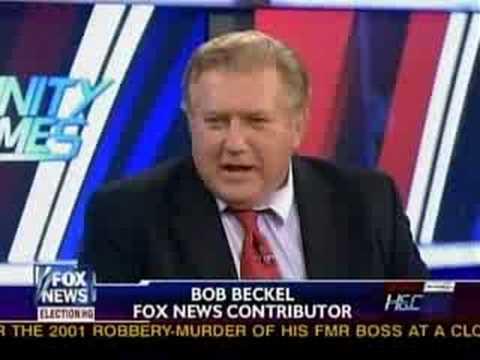 Now is the time to fire Bob Beckel. The problem is, he works for Fox News and they have a vested interest in keeping an embarrassing, ridiculous string of Democrats on retainer:

Bob Beckel stunned his own co-hosts when he suggested that rape does not happen on college campuses during Tuesday's "The Five."

The Fox News roundtable was debating Colorado legislation that would allow women to carry concealed weapons to prevent sexual assault at colleges.

Beckel was skeptical, and asked, "When's the last time you heard about rape on a college campus?"

"What are you talking about?" an indignant Eric Bolling said. "It's rampant."

"Yea, date rape, that's one problem," Beckel conceded, "but you gonna take a gun out and shoot your date?"

His remarks are horribly, horribly wrong. His ideas are frightening. His attitude is unforgivable and insensitive in the most extreme regard. This is a man who has a position on an issue that is so devastatingly ignorant that it pretty much wipes out everything else.
Will Fox News fire him? Or will they slap his wrist and continue to employ him, thereby embarrassing those with "liberal" views? Anyone who employs him validates his position on campus date rape not actually being rape. Well, rape is rape, and there simply are no qualifiers.
At the end of the day, Bob Beckel is a disgusting human being.
on February 20, 2013