Why Is This Man So Smug? 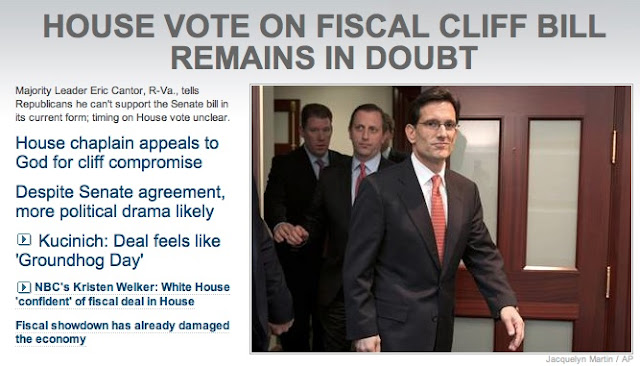 The deal that exists in the "fiscal cliff bill" is one that the Republicans should have taken today. It would have demonstrated that they can join the Democratic Party and govern this nation. Sadly, we are treated to the smug confidence of Representative Eric Cantor who wants to be the next Speaker of the House of Representatives.

America's phony belief in bipartisanship, governance, and austerity are reaching a merciful conclusion. If the Republican Party wants to wreck the economy and destroy the American way of life, fighting them is the last, best hope for the world. Cantor's smug demeanor suggests that he believes in a future where his power is absolute. I wonder who will begin to cut his knees out from under him first, with the help of Joe Biden and a few furious Republican senators.

Cantor and his supporters hate America. They want the economy to fail so that they can run a candidate (Cantor himself? Paul Ryan? Who knows?) who will take back the White House; the mid-term election for 2014 should add Republicans to the House, if history follows the trend that sees the second term of each President end up in disarray.

These people are praying for disarray and strife, and for the misery of the American people. A smarter, more well-informed people would turn them out on their ear and burn up the phone banks. I'm not betting on that, either.
on January 01, 2013