What is Mark Levin's Point? 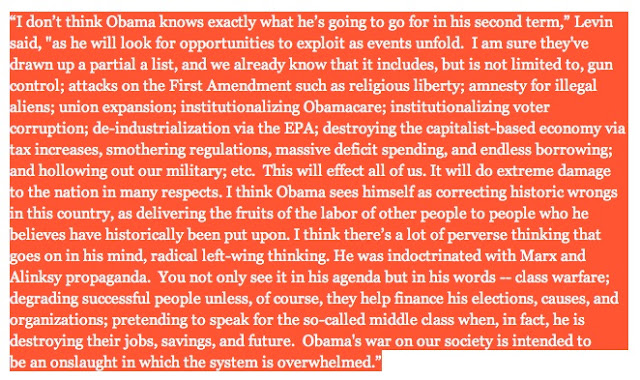 Over the last few days, I've been watching the headlines out of the conservative media, and Mark Levin keeps popping up. Here he is over on the Breitbart FAIL site, being quoted at length and his entire screed is a mishmash of paranoia. His unethical rants should be mocked for their desperation.

There is no coherent opposition to President Obama. There is no message emanating from the Republican Party anymore. It has degenerated into a laundry list of things that simply aren't happening the way that the conservative media believes it to be happening. The gun control proposals, for example, are primarily centered around common sense and public safety, and enjoy popular support. They help keep dangerous weapons out of the hands of crazy people. They effectively co-opt many of the conservative controls over the gun control issue because they don't particularly infringe on the rights of anyone except the people who shouldn't have guns in the first place.

When a President can drop a slew of executive orders and receive a ho-hum from most of the American people, and an attaboy on a lot of the ones that keep America safer, then you have to conclude that the fringe is really out there, howling about a bit nothingburger.

Levin is angling himself to become an "opponent" of the Obama Administration but he simply doesn't possess the coherence or the experience to pull this off. He pulls lever after lever, reciting issues over and over again, without thinking them through.

The Obama Administration isn't going drown anyone in regulations; the progressive wing of the Democratic Party has consistently faulted him for not going after bankers and "too big to fail" organizations.

Obama's thinking is perverse? Then why is he constantly asking everyone to work together? Why is he asking for consensus and for dialogue? What evidence is there to suggest that his thinking is perverse? Could it be the fact that he has a family and a happy life? Compared to Richard Nixon, who appears to engage in "perverse" thinking?

Does anyone seriously think we are "de-industrializing" this country when manufacturing jobs are actually coming back? This is what makes Levin so comical. How is the EPA--an organization that is fairly toothless and underfunded in actuality--supposed to de-industrialize a country that actually makes more products than it did four years ago? The de-industrialization of America began under the Bush Administration; six million manufacturing jobs were lost during Bush's eight years in office.

I mean, these examples are just pathetic. Obama, Marx, and Alinsky? Who is still beating that drum? This is what was done to keep Obama out of office, and it failed. Everything Levin is peddling failed to keep the President from being re-elected. All of the hate, the phony rhetoric, the birtherism, the nonsense and the racist garbage failed because it rang hollow with the majority of the American people who saw a clear choice and chose against everything Republicans are selling. Levin's hate parade is a sad example of what happens when a country stops taking care of the mentally ill. It is deranged and sad.

What I want to know is, who's really believing any of this crap? How is this supposed to accomplish anything when the American people stopped buying it years ago?
on January 21, 2013