The Palin Brand is Worthless 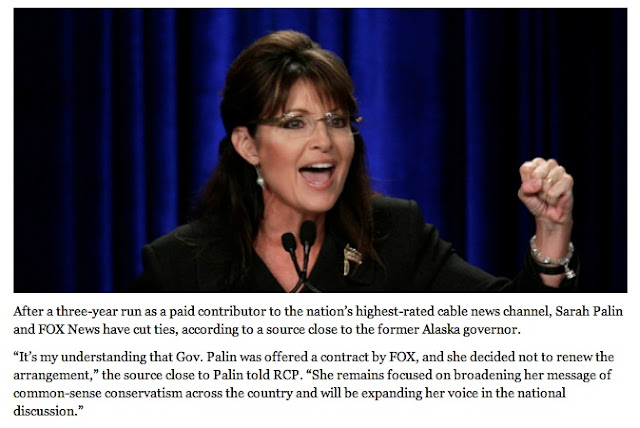 The slow descent into irrelevance never shows up well on television. When a fading personality finally realizes that they have no influence and no hope of regaining the spotlight, do they turn down television deals or do they do something a little savvier in order to "reinvent" themselves?

There had to be something in the deal from Fox News that made Sarah Palin balk at signing the papers. Perhaps they were only offering her the occasional appearance and only for chump change. Perhaps they were asking her to follow someone so far down the food chain that the intended insult caused her to tear up the papers in embarrassment.

I have never seen evidence of anything savvy about the Palin machine; they take the deals they are handed and they ride them until they are worthless. She has a following of people that will never expand or elevate her to national office. Will they buy her books and her trinkets? Probably. This should be enough to sustain her for another four years or so. After that, interest in her will fade considerably, especially if she leaves her followers in the cold and declines to make the pilgrimages to Iowa and New Hampshire so that she can receive single-digit totals from bored voters.

As long as Sarah Palin stays in Alaska, she isn't going to reinvent herself or regain the spotlight that she had in the 18 months or so after running with John McCain in 2008. That seems like a lifetime ago, doesn't it? That's why she has the next four years or so to do something. Anything. And then, whoosh. She simply won't matter to anyone anymore at all. Her only hope is to run for the United States Senate and become Alaska's voice in Washington D.C.

Are the people of Alaska willing to vote for her? Why not? They would be glad to rid themselves of this woman and her family.
on January 25, 2013
Email ThisBlogThis!Share to TwitterShare to FacebookShare to Pinterest
Labels: Accountability, Conservative, Editorial, Fake, Fame, Family, Fraud, Media, Money, News, Politics, Republican