The Conservative Movement is in Disarray 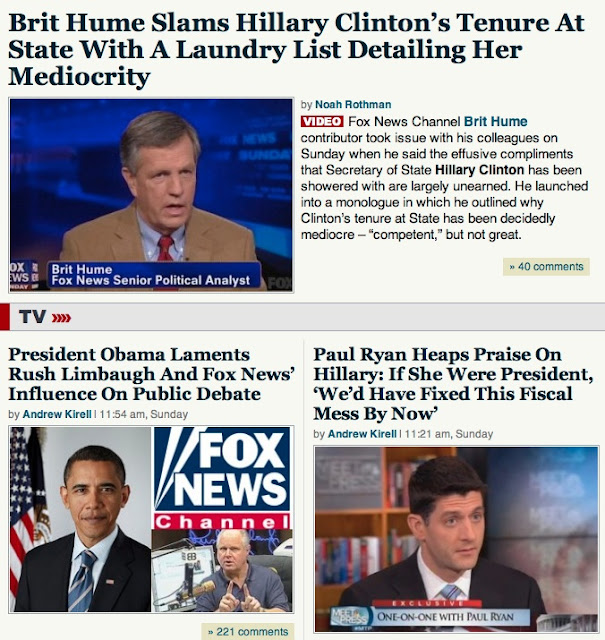 Here are three stories that populate the front page of Mediaite.com. Notice anything?

You have Brit Hume using Fox News to downplay the legacy of Hillary Clinton. Then, you have the President complaining about how Fox News (and someone who we'll call Rush Limbaugh for fun) has "influence" in American politics. Then, you have Paul Ryan going off the conservative script to praise Hillary Clinton and thus undercut his fellow conservatives so that he can, presumably, pick his own opponent for the 2016 Presidential Race.

There is no sustained, cohesive message from the conservative movement right now. The message discipline of years gone by is long gone. There are elements jockeying for position, and that position continues to become more fragmented.

I think that there is nothing savvy about what they are doing. The fact that the President was re-elected has shocked them into a panic. And, as others have pointed out, the President was much better about using social media, technology, and Silicon Valley. Those elements don't want anything to do with the conservative movement, which becomes more and more repugnant and anti-American as the days wear on.

Paul Ryan, at least, is trying to come off as the least shrill of the bunch, but he's still mired in his own fraudulence. Why is anyone concerned about what these people think anymore? They lost, and they lost in ways that are more defined and easy to understand in light of the fact that America is becoming a more open, tolerant, and diverse country? It is not a center-right country anymore, and it never will be again so long as the conservative movement remains a mildly confused hate group led by the likes of Rush Limbaugh.
on January 27, 2013