Phony Issues and the Republican Party 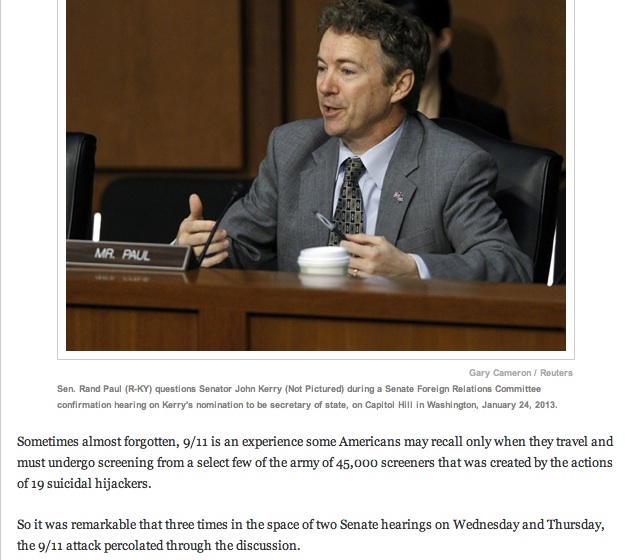 The last, best hope for the Republican Party, circa 2013, is a terrorist attack on American soil that they can pin on Democrats.

If you read stories like this, and if you're wondering to yourself, "why is an abject phony like Rand Paul, himself the spawn of Crazy Uncle Goldbug Liberty, being accorded a level of respect in a debate for which he has no right to a coherent opinion?" then look no further than our graceless media.

What happened at the hearings for John Kerry and Hillary Clinton this past week was nothing short of a public beatdown for the Republican Party. They came off looking opportunistic and out of touch. They came off looking like incompetence had never left their ranks. And if you're wondering what the Tea Party thinks, and why anyone should care, then today's issues are not being explained properly to the American public.

The things that matter right now are economics, not security. Except that there is no security without a clear and concise focus on economics, and that the Republican Party has no credibility on either of these matters. The Democratic Party has to start creating jobs and it has to break the Republican hold on the things that are preventing our economy from expanding and growing. They have to make things work in ways that will benefit the American people. Ending our wars of choice overseas will help, and staying out of Northern Africa is paramount. We have no business there, save encouraging the French to do the dirty work for us.

The media simply isn't capable of explaining economics to the American people anymore. And so, we are left with Rand Paul lecturing people about security. What is his track record on keeping the American people safe? Has he served our nation in any capacity other than as an opportunist? Are we going to be lectured by an eye doctor about American foreign policy? And why shouldn't people be laughing at a man who thinks he's somehow qualified to have an opinion about what will keep Americans safe?

Paul represents the elevation of ignorance and anti-intellectualism in our politics. He is the Tea Party's best hope for the future, and that future looks nothing like what America's future should be. These are not the people you would want to trust with our safety and security.
on January 27, 2013
Email ThisBlogThis!Share to TwitterShare to FacebookShare to Pinterest
Labels: Accountability, Congress, Editorial, Fraud, Government, Incompetence, Leadership, News, Opinion, War, War on Terror